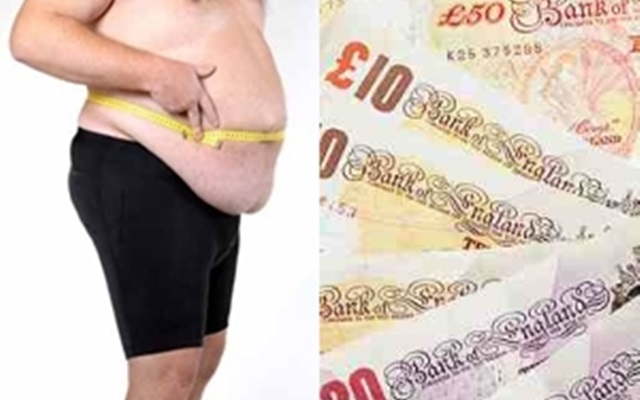 It does not surprise me to learn that according to a new study, people who are paid to lose weight lose more than those on traditional diets. I’m sure that cash incentives can persuade people to do just about anything. But yesterday, as Prime Minister David Cameron spelt out the scale of Britain’s debt – £770 million, which is expected to rise to a staggering £1.4 trillion within five years; the idea of paying people to lose weight is not without its critics.

“If the NHS had money to spare it would be okay, but the fact is the NHS is short of money. There are plenty of people who cannot get funding to pay for treatment for illnesses.”

The NHS Weight Wins scheme encouraged overweight people to sign up to its slimming programme where they could earn up to £3000. Figures supplied by the NHS showed that the majority of the 745 dieters lost more than 14lbs on average, which was more than double the weight loss by traditional dieters.

According to the founder of the scheme, Winton Rossiter, the results “suggest that long-term financial incentives could be the best single weapon in the war on obesity.”

And with obesity overtaking smoking as the biggest threat to health, drastic action is needed to tackle the problem.

Recent studies paint a bleak picture of the future. Figures from the National Heart Forum from 1993 to 2007, based on the National Health Survey for England, suggests that 41 per cent of men aged 20 to 65 will be obese by 2020, with a further 40 per cent of that age group being overweight.

According to a House of Commons report, the direct cost of treating obesity is £480 million, but the indirect costs, such as loss of earnings due to sickness and premature death amount to around £2.1 billion. The projected combined figure for 2010 is £3.6 billion.

So whilst it may seem crazy to be paying overweight people to shed pounds, it could actually prove to be cost-effective. Rossiter estimates that the Weight Wins scheme could save the NHS £1.7 billion in lifetime medical expenses for every million people who participate in the programme.

At a time when 31 million adults in Britain are obese or overweight, that could amount to billions of pounds worth of savings. Critics of the scheme like Ann Widdecombe may argue that the NHS cannot afford such a scheme, but the real question is whether we can afford not to pay people to lose weight.

Surely it makes sense to do so to ensure a healthy nation in the future and to avoid spending billions of pounds tackling only the symptoms of obesity, instead of implementing a strategy that delivers positive results?