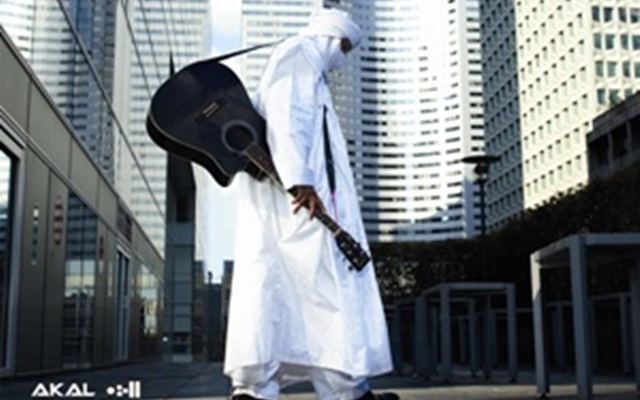 When Rissa Ag Wanaghli, former member of the Nigerian music act Takrist N'Akal, meets Plume, a prominent figure in French music, what outcome can be expected? The answer lies in Atri N'Assouf, “the Star of the Desert”, a young group that has just self-produced its debut album, Akal.

Here’s a brief presentation of a band that could well become the next heavy weight of the Tuareg scene.

It all began in a balmy evening under the starry sky of the Sahel, at a charity event in Niger. While Rissa was strolling on stage, Plume, whose CV alone would require several pages, noticed him and managed to meet him. There then followed a musical journey that grew bigger and bigger, symbolic of the harmony between the two artists.

Rissa is not a novice in the music field. He once travelled throughout the whole Sahara Desert, from his hometown of Arlit to Libya via Tamanrasset in Algeria, where he was a pupil of the famous Abdullah Oumbadougou.

Building up experience that now dates back more than twenty years, he also crossed the path of music groups as prestigious as the above-named Oumbadougou’s Takrist N'Akal, or Desert Rebel, with the French artists Amazigh Kateb (Gnawa Diffusion) and Gizmo (Tryo).

Confluence of two worlds, Atri N'Assouf now constitutes the newest stage of his career. With compositions in the vein of the Tuareg from the Aïr Massif, embellished with Plume’s percussion play, the group puts forward a facet full of sunshine and good mood. For if many Tuareg artists offer a rather dark and nostalgic vision, Atri N'Assouf’s music has a little cheerful “je ne sais quoi”.

Quite logical for Rissa because: “it's something we love to do. Also when I compose, I think of the bassist and percussionist and what they like to do. So everybody feels happy and it is the joy!” The titles Taimana or Tamiditine nicely illustrate this spirit, showing off guitar melodies that would make even the most sceptical smile.

Distinguished guests also stand out, such as Abdallah Ag Alhousseyni (Tinariwen) with the bluesy Medan, or Disco (Tartit) who ends the musical adventure on the soothing ambience of Aitma. Combined with the very upbeat N'Marha, it’s the whole of West Africa that is depicted.

Openness is desired by Rissa who says he “wants to make music with lots of artists and find out about musicians in the West.” But he also insisted: "[Atri N’Assouf] is my personal style, it remains Tuareg, Tuareg!”

“Akal” means the country in Tamashek language. For a Tuareg, this term rhymes with the Sahara desert. The album thus gets across every bit of the Saharan region, and even beyond.

“The desert represents everything to me. It’s like my other half,” Rissa said. So get your ears wide open and let these warm melodies carry you away to the Star of the Desert.