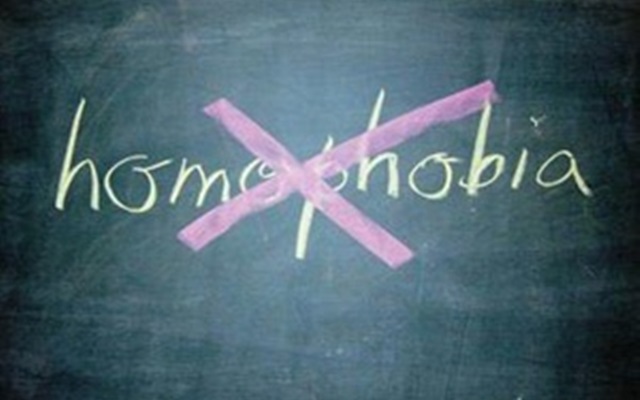 To be or not to be: homophobic

I am writing this piece on homophobia because over the past few weeks I have listened to and partaken in, various discussions on what it means to be “homophobic”. On each occasion I have stated and will do so from the outset here, that the word is not appropriate and does not make sense, yet when you state this people start “back back” which is Jamaican for being overly defensive.

For example, I was recently contacted by a researcher from a mainstream TV channel to discuss the issues of cross racial adoption, a subject that has been widely discussed over the past weeks on Galaxy Radio by various presenters including myself.

At this point I asked them if they had considered the fact that many of the people from these communities are being excluded because of their perceived “homophobia”. Apparently you are asked your views on homosexuality during the adoption process and if you suggest, for any reason cultural, religious or otherwise, that you do not accept this behaviour as “normal” your application is binned.

All of a sudden it was a case of “well, you know we are not going to touch such a sensitive area because” blah blah blah, yaddah yaddah yaddah!

I informed them that this is what is wrong with this so called “free” and open society where “everyone” can supposedly express their views as long as they are not promoting anti-human sentiments, to which end I am in total agreement.

Yet just to mention a mitigating factor, this perceived homophobia, that is central to this particular discussion and sheds light on why so many of these families are excluded from adopting these children, cannot be discussed, much less considered broadcast-worthy.

I then stated that I touch on this issue in my book Whiteness made simple: stepping into the grey zone, where I explain how the so-called “grey” areas that people are want to discuss openly and honestly, are often the areas that deal with the mores that underpin black/Afrikan/Caribbean or Asian worldviews.

It is aspects of these worldviews that mainstream white society find unconventional and problematic, when measured against their all-over-the-place conventions that are steeped in contradictions.

I am still waiting for a meaningful, reasoned, discussion on what is meant when certain people or communities are branded homophobic. For instance there are loads of commentaries by black/Afrikan/Caribbean/Asian academics, journalists and other cultural commentators on the issue of homophobia in our communities here and abroad, yet I am still to find one who actually defines what the term means from their perspective.

I for one cannot accept that if you do not accept homosexuality as normal you are, by extension, homophobic with all of the “ill-logical” trimmings that go with it. Moreover when I was studying and subsequently teaching in a university setting I noticed that any time the issue of homosexuality arose the discussions with homosexuals and their straight sympathisers became heated and contentious and I was invariably branded homophobic for one main reason.

This was because I would unequivocally state that whilst I accept (this was not the case with me before I entered that arena) that homosexuality may indeed be normal for some people; if that is what floats your boat then float on I say. For me it is normal to be heterosexual.

Now I think that for most reasonable people this is a reasonable position, yet I would be constantly attacked simply because I would not accept homosexuality as normal behaviour for me as a heterosexual man.

More importantly do I have to? During these discussions I never attacked anyone physically or verbally for their beliefs or preferred lifestyle, yet they never seemed to be able to accept my position and would intimate that I am the one who is not normal and homophobic.

Whatever happened to “can we can agree to disagree”? Well it seems that in this case it is not so and I would suggest that the word homophobia has everyone so spooked that they are afraid to interrogate its usage for fear of being labelled as such.

This is understandable as anyone who is semi-conscious knows that when you are publicly branded as homophobic, unless you make some kind of grovelling public apology (you know when you apologise and are not sure what you are apologising for) you will not be forgiven.

I say branded because as they say, throw enough dirt and some will stick and I certainly have got plenty of stick for being steadfast in my views on this matter, and as I have stated elsewhere there is a qualitative difference between “the freedom of speech” and the “freedom to speak”.

Consequently, those of us who do not advocate hatred in any way shape or form against homosexuals, are legislated against for our heterosexual non acceptance of homosexuality as normal for us and subsequently branded as “homophobes” with no room for a meaningful discussion.

Hence I just want someone, anyone, to tell me what the word actually means to them and more importantly why are so many people afraid to even have this discussion, publicly? I know that within certain circles they have had such discussions for years but how many people whose lives are impacted by this form of negative labelling are aware of them?

I cannot recall a single instance on any mainstream TV or Radio network in the UK where the actual meaning of the term is discussed. It is invariably taken as given that we all understand the meaning of homophobia and as such we just proceed and perpetuate this form of reified knowing.

Words and their subsequent usage have serious social, cultural, political and psychological consequences and as such, for me, it is crucial that I know in the first instance, what a word means. According to the online Oxford Dictionary homo means “same” or “of or belonging to the genus Homo” and phobia means “an extreme or irrational fear of or aversion to something.”

Note the word “irrational” is used as the real qualifier here as it suggests that one follows a line of reason that has no basis in the “rational” and is therefore untenable when placed under scientific scrutiny; whereas “extreme” or “aversion” are base reactions that can be grounded in a concrete experience. Let us now consider, using this same system of logical reason, the word “homophobia” to determine what it means.

The online Oxford Dictionary defines “homophobia” as “an extreme and irrational aversion to homosexuality and homosexual people.” Just backtrack and read that definition again and then rejoin me…

So according to this definition we merely fill that nebulous “something” with a “thing” in this instance “homosexuality and homosexual people” and we’re good to go. Well you may be, but I am not!

I therefore await clarification or further enlightenment on this matter because it seems that a meaningful, cross cultural/racial/political/religious dialogue on “homophobia” is not allowed, even though being branded as “homophobic” hurts so many people in myriad ways.

Craige Lewis – Why blacks should be homophobic

2 Comments On “To be or not to be: homophobic”