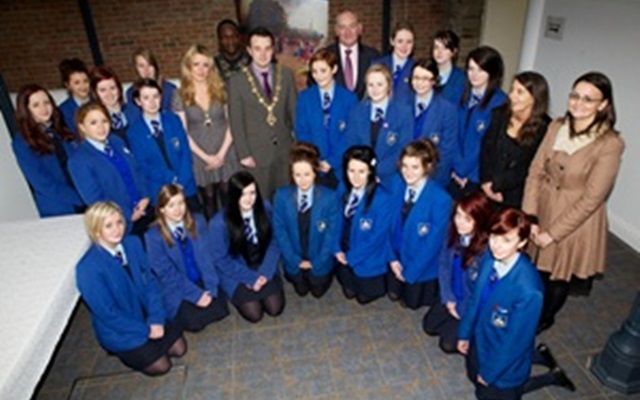 On January 27 2011, schools and colleges in Northern Ireland marked Holocaust Memorial Day with a variety of events. In Derry’s Tower Museum, the local Member of Parliament, Mark Durkan, joined a group of students and community workers to celebrate the liberation of Auschwitz. The theme of the anniversary was ‘Untold Stories’.

Chilean human rights curator Roberta Bacic spoke of the deep legacy of the Auschwitz atrocities that have left permanent scars on the lives of millions across the world. Roberta’s mother was a survivor of the Holocaust in which up to 6 million Jews, 1.5 million Romani, hundreds of thousands of disabled people, Slovenes, ethnic Poles and many others were butchered.

Roberta gave a poignant narrative of how women of infinite resolve like her mother who suffered torture and seclusion but conquered the same by finding new life in South America. The memorial also focused on modern slavery and how it affects the daily lives of victims especially where children are involved.

The Derry African and Caribbean Association of Foyle through committee member, Elly Omondi Odhiambo, presented an overview of the current corporate participation in abusive supply chains, in particular the Chocolate Industry.

It was recommended that governments be more proactive and assertive in compelling chocolate producers to obtain their raw material cocoa, from good sources rather than through child labour as is still witnessed in many parts of West Africa.

Even if there is a global protocol on how to deal with the child slavery phenomenon, in cocoa plantations in West Africa, it is quite difficult for authorities to police what is happening. This is because the farms are not corporate plantations. These or cooperatives are very few.

Instead, there are basically thousands of family smallholder type farms, which make it significantly complex and costly to implement policy. This can also be further complicated by lack of transparency by local officials in placing any viable penalties for breaking labour laws.

The majority of the college students who attended the event did not have any basic knowledge about the cycle of growing, harvesting and other supply chain activities that cocoa passes in West Africa before the final product – the humble chocolate, reaches retail shelves.

The Northern Ireland children spoke of a need for more openness and lessons on ethical consumerism, if this mode of modern slavery is to be defeated. In Britain, the issue of child slavery in cocoa was highlighted in 2000 after a documentary broadcast by Channel 4.

In Northern Ireland, children are now more aware about the Fair Trade campaign but even among them, there was a widely held view that most Fair Trade products are expensive compared to the generic versions. One thing they were glad to know, was exactly where this year’s Easter egg is coming from.

Main photo by Tom Heaney at the Holocaust Memorial Event at the Tower Museum in Derry. The Mayor and Mayoress of Derry, Mark Durham MP and students from  St.Mary College,Creggan, Derry are pictured.

African and Caribbean Association of Foyle

Who shot Mark Duggan?
Why it’s still worth pursuing a truly democratized media
Starkey is wrong to blame troubles in England on black culture