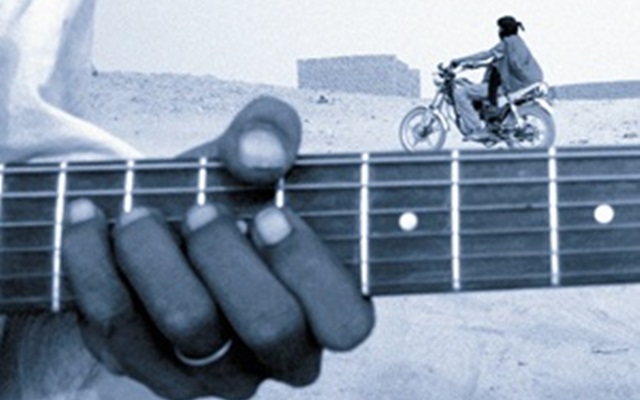 Three years after the compilation Ishumar was released, the Touareg rockers are back on Ishumar 2. While the first part presented up-and-coming or internationally acclaimed artists, this release focuses on a segment of Touareg music still unknown to this day.

The ishumars have been in the spotlight for the past thirty years. They appeared amid a social crisis in the Sahara, and were symbolic of a changing world where traditional nomadic life was no longer possible.

These new Touareg became semi-urban, they were mocked and pejoratively nicknamed “ishumars”, from the French word “chômeurs”. But they eventually adopted the term that turned into the trademark of a musical movement whose main tool of expression is the guitar.

Tinariwen long remained as the sole representative of this music. But it has since grown and carried along the path numerous new artists. Ishumar 2 mirrors this dynamic. Emerging talents come in for historic bands such as Tinariwen or Terakaft.

Ibrahim Djo Experience kicks off with Anchar. If the guitar riff is redolent of classic Saharian rock, drums make their way in. The instrument is still under-represented in Toureg music and adds a slightly more powerful dimension to it.

This is somewhat emblematic of the artistic direction of the compilation. The new wave of ishumars intends to push its music further. Using new elements then only appears necessary, even though the guitar constitutes the base.

Varied and complementary styles are present throughout the twelve tracks. Amanar fires up with a touch of rap on Aghafiat. Kel Assouf calms the mood down with Imidiwane, where a delicate flute is soothed by a light calabash rhythm. Atri n’Assouf, in duet with Tartit’s singer Disco, also showcase their talent on a profound ode calling for the Touareg people’s unity (Aitma).

The Touareg also love their blues. Nabil Othmani thus seizes the opportunity to present Edjmayegh s'emeli. The young Algerian artist adapts the genre his own Touareg way, blending sonorities dear to the likes of John Lee Hooker or Ali Farka Touré. Definitely a peak of the album.

If the shadow of Tinariwen is significantly felt from beginning to end, it is counter-balanced by a real desire to do something different. “Young artists’ relationship with Tinariwen is quite ambivalent,” says Sedryk, the producer of the project.

“On the one hand, they show them an enormous respect but at the same time they want to prove they have their own style.”

Over the past few years, Reaktion music label has provided surprising discoveries from the Sahara. Ishumar 2 remains in this vein and does not disappoint. These new Touareg guitars have shown all their potential. They now need to fully assert themselves and stand out from the great influence of their progenitors.