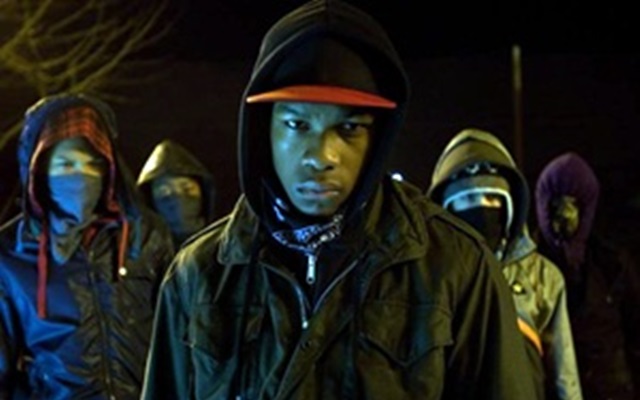 It’s number three in the UK box office, after Thor and Fast Furious. It features a majority black British cast but how does the film Attack the Block portray black people and what impressions will audiences walk away with?

The main characters in film are a gang of five muggers. They are black or mixed race apart from one white boy. They all live on a council estate which conforms to the usual stereotype: shabby, dark and graffiti-strewn.

The first time we see them, all five corner a single white woman on a lonely street. Their leader, with hood up and mask on, blocks her passage, demands her phone then her bag, then her ring. At each demand he becomes more violent producing a flick knife before shoving her on the ground.

She is laying there while the gang surround her when they are distracted by an explosion in a nearby car and she runs away in the confusion. One of the gang points out her escape but the leader says “allow it” and proceeds to ransack the car. It does cross one’s mind as to what else they had in mind for the young woman, bearing in mind they had taken all of her possessions.

This concern is brushed aside as the explosion reveals an intruder that they must kill as the outsider is ‘not from the block.’ Once the gang has kicked it to death they decide “it” is an alien and so the story begins. We later find out that this intruder was also female.

Meanwhile the young white woman is comforted by an older white woman who commiserates with her that the estate is full of “f***ing monsters.” The gang later invades the woman’s home and force her to provide first aid. We also discover that there is a violent black drug dealer on the estate with a flat full of weed. He listens to a heavy bassline rap with lyrics like:

Get that Strap (gun)

The drug dealer  promotes  the leader by giving him some class ‘A’ drugs to run,  at which point the arrival of more aliens distract the gang yet again from further illegality and they get tooled up so they can go on a killing spree. The boys just happen to have machetes and samurai swords to hand.

And what about these aliens? How are they described? This is what the gang members say…

“This thing is even blacker than my cousin Femi!”

The black females in the film are portrayed in a much more positive light. They give shelter to the boys when they are in trouble and are shown to be sensible, caring, articulate and loyal. They disapprove of the crime and violence the boys are involved in and tell them so. They stick up for themselves and even manage to subdue an alien without being saved by the males. They offer pertinent observations about the leader’s conduct which make him reflect on his behaviour.

While contemplating   the aliens’ presence the leader states:

“I think I think the government sent them things. First they sent drugs.  Then they sent guns. Then these monsters. Black boys aren’t killing each other fast enough so they thought they’d speed up the process. ”

This social commentary is totally undermined by the joke which immediately follows – but there evidence to support claims that crime and violence have been sponsored by the state in inner city areas of the US and UK.

In 1998, a congressional inquiry led by Maxine Waters revealed that the CIA was importing drugs into black areas of Los Angeles and giving crack cocaine dealers like Ricky Ross preferential treatment. The drugs and guns distributed by the US government led to catastrophic social breakdown in the black community, which was then blamed on the black community.

Closer to home, Delroy Denton and Eaton Green were violent drug dealers recruited by Scotland Yard to work as informers. While working for the Met Police they distributed drugs and committed violent offences in the black community. Delroy Denton went on to rape and murder Marcia Lawes in 1995. Denton had previously been linked to seven murders in Jamaica. No police officer was prosecuted.

Operation Jackpot in 1993 revealed that police officers in Stoke Newington were supplying drugs and guns to the local community while beating up prisoners and planting evidence on black people. This behaviour had already been exposed by the black run Hackney Community Defence Association. All the above were dismissed as conspiracy theories at the time.

The film ends with the leader being handcuffed and taken away in a police van suspected in the murder of two policemen. Meanwhile the estate dwellers are out in force demonstrating and shouting the leader’s name. The name of the leader ..? Moses.

So by the end of the film we’ve seen that black boys are violent, predatory, anti-social drug dealers who like to gang up on single white females but can be gainfully employed  using their aggression against monsters from another planet that  just happen to be “blacker than my cousin Femi.” When they’re done fighting aliens they end up prison.

Many people will rush to see this movie and be influenced by it. Some people will watch it and see all their worst prejudices confirmed and reinforced. Others will watch it, laugh and applaud the negative portrayals of themselves as they have so few alternatives. Some will see it identify and emulate. It might not be so bad but for the fact that there is already a relentless procession of images and reports of black males being involved with crime and violence.

Here is a comparison which goes to the root of the black image on screen and how media portrayal affects social reality.

Joe Cornish, who is white, made Attack the Block after he was mugged by a group of boys in Brixton. It is his first film.  It was given a budget of £8 million. It’s on 352 screens across the country and is being heavily promoted via web, TV, buses, magazines etc.

Menelik Shabbaz, award winning black director of several films including Burning an Illusion (1981) could not get any money from the establishment to fund The Story of Lovers Rock. The film is a history of 30 years of the Black British community, its musical legacy with stories of achievement, police abuses and the fight for equality. He had to fund it entirely himself. It will be released in September on a limited number of screens and has an advertising budget of zero.

7 Comments On “Film Review: Is Attack the Block an attack on blacks?”