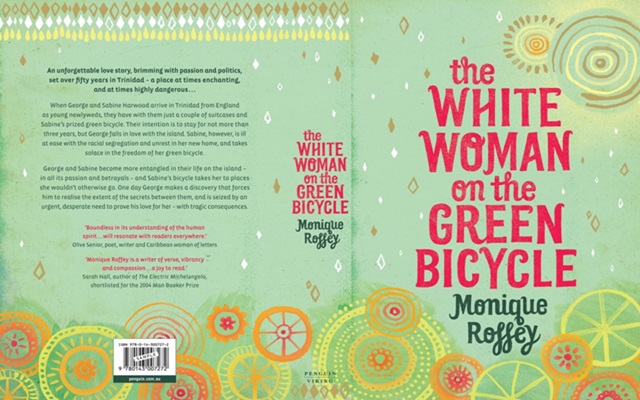 Book Review: The White Woman on the Green Bicycle

In most of the Caribbean novels I have read, the narrator is a son of the soil. In The White Woman on the Green Bicycle the main characters are George and Sabine Harwood.  The couple arrive from England in 1956, prior to the People’s National Movement’s ascendance to power. Sabine expects they will depart in three years – but they never leave.

The scenario mirrors the lives of the ex-pats I have met who have settled into Caribbean life.  They arrive to take up a post with a company and live very differently than they would in their home country. In most cases, they move on but in exceptional cases the husband stays behind having fallen in love with island life.

Though flawed, George Harwood makes a more sympathetic character than Sabine. He falls in love with the island and satisfies his yearning to own a bit of Trinidad. He also feeds his appetite for alcohol and sex with prostitutes.

Yet the author makes it clear that George is still enamored with his wife, even if this is after he discovers her letters to Dr. Eric Williams.  The desire to win Sabine back leads George to give in to her demands to “do something” when their maid’s son is beaten up by the police.

While the story is told mostly through Sabine’s eyes, I was not sympathetic to her at all. Instead of adjusting to her new life she sees Trinidad as a rival to which she has lost her husband. It is understandable that tropical heat can be draining on those not used to it – but Sabine never adapts in half a century.

In her own words: “Hot countries I knew, European countries. But this heat was indecent, like breath or fingers; hands on me, touching me.”

The descriptions of the landscape are vivid but sometimes come across as coarse because they are described through Sabine’s eyes. It is as though the land is mocking her with its lushness, having captured George’s affection.

Then there are the conversations Sabine has with the mountain, which she perceives as a curvaceous woman lying on her side.  Her words are mostly accusations and the mountain responds with smugness, like a woman assured of her place in a man’s affections.

The author shows her prowess as a writer by her ability to stir emotion in the reader. Many a time I had tears in my eyes. I met Clock early in the novel, a talented young singer with twisted limbs:

“The boy lurched along the dusty pavement, one arm longer than the other; this longer arm hung limp, twisted at the joint.  This was how he got his nickname, Clock…

Three miles to Boissiere village; the boy would have walked it. His legs were worse than his arms, twisted at the ankles.”

In a conversation inside his car, George speaks to the boy about God. I was touched by Clock’s response to George’s declaration that he does not believe in God: “He give me bad arms, but good lungs. Bad legs, but a good brain.”

I’m not sure if it was the writer’s intention, but I could not help comparing Clock’s situation with Sabine’s   and wondering what she had to complain about, living in a villa with a maid at her disposal, doing nothing all day.

The historical backdrop will intrigue students of Caribbean history. I admire the author’s creativity in inserting  Dr. Eric Williams and the Mighty Sparrow in the novel as a bit more than cameos of themselves.

The country’s social ills are explored and highlighted through Sabine’s eyes. The Black Power Movement of the seventies exacerbates a harsh social climate, which results in riots. The expatriates leave in droves, but George and Sabine do not succeed in their attempt to flee the island.

George is painted as shallow and intelligent, absorbed with the land and its beauty and what he can carve out of it for himself. On the one occasion that he decides to stand up for natural justice, he fails miserably.  As Sabine observes, George adopts Trinidad, but even after such a long time still sounds like an Englishman.

This novel brings to mind Cloth Girl, which is set in Africa. It is the story of an expatriate couple who travel to Ghana. The wife hates everything about her new home, is determined to be unhappy and eventually becomes an alcoholic. The stories are similar but the differences lie in the culture, the political upheaval in Trinidad, and the fact that Sabine endures her unhappiness for half a century, rather than leaving.

Roffey has a talent for transporting the reader into her setting. After reading The White Woman on the Green Bicycle, I feel as if I’ve been in Trinidad, felt the scorching heat, seen colour running rampant in the flora and heard the lilting accent of the people.  The writing is rich with sensory details.

There is an overt sexuality that runs rampant throughout this book. It is hinted that away from England, expatriates are more lax in morality. This slippage in standards is supported by the storyline and subtly carries over to the sometimes earthy portrayal of Trinidad’s abundant plant life.

Roffey successfully captures the differences in lifestyle between the haves and have-nots, as well as their struggle to survive their unique challenges.  I was absorbed by the unfolding story which demonstrates how Trinidad grew and changed over the years from a colonized to independent country.

2 Comments On “Book Review: The White Woman on the Green Bicycle”