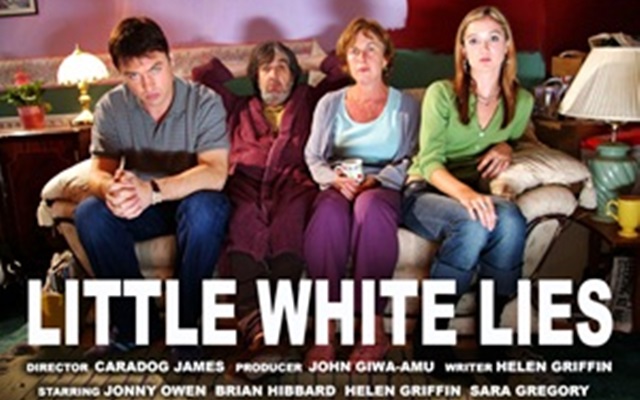 A gritty comedy about racism in Wales sounds an unlikely candidate for a Hollywood hit. Nevertheless, Little White Lies is in line to win a lucrative distribution deal with American giants Warner Bros.

It is currently topping an online contest at Amazon Studios, where the winner also collects $1million (£630,200). First shown on ITV Wales, the film follows the trials of a Swansea working-class family who are slowly being torn apart by fear, anger and discrimination.

Most of the action takes place in the family home, with brief opening snapshots of the main players hinting at what is ahead. Layabout dad Tony is full of bile and bitterness for anyone who comes up in conversation or appears on his TV and worried daughter Serena has a secret she dare not share.

Impressionable son Steve is slowly falling in with a manipulative BNP crowd, while beleaguered mum Karen is left trying to hold it all together. Earning the family’s money at a care home seems to be the easiest of her countless roles, as she cooks, cleans and washes while trying to keep the peace.

Tensions come to the boil when Serena falls pregnant with her Indian boyfriend Ramesh, whose father suffers a racially motivated attack with closet-racist Steve unwittingly involved.

The family dynamic plays out like a darker version of The Royle Family, with Brian Hibbard’s Tony an angrier, racist Jim to Karen’s harassed, doormat Barbara.

When Steve tricks Tony into believing they have won the lottery, Karen’s reaction to the prospect of living abroad could have come straight from a Caroline Aherne script: “Can we just have a loft extension and some decking?”

Parts of the film are hard to watch at times and it’s sickening to hear the racist language spouted by Tony and Steve. Harder still is the realisation that their attitudes are probably replicated behind the walls of numerous homes across the country.

The characters seem to believe the racism that flows from them is just harmless, a derogatory word here or a sweeping stereotype there. When Karen challenges Tony about his indifferent attitude to the attack on Ramesh’s Dad, his protests of “I’ve not done any of those things,” are typical.

The implication is clear, however. While he didn’t deliver the blows himself, he may as well have done. The film adeptly links these ‘harmless’ attitudes to the hate-fuelled violence and mindless prejudice happening on-screen and sadly in real life too. Serious subjects are deftly played out between plenty of comic moments and the writers have a keen eye for irony.

In one scene BNP Professor Dr James preaches to Steve about the barbaric way Muslims kill their animals, before happily tucking into a steak and kidney pie. In another Tony rants about asylum seekers milking the benefit system while he spends the day on the sofa, smoking weed.

There are impressive performances throughout, from the versatile Hibbard’s hateful Tony to the intense Steve of Shameless’s Jonathan Owen. Sara Gregory’s Serena is feisty and intelligent in her arguments with dad but its Helen Griffin’s Karen who steals the show. She wrote the play Flesh and Blood, from which the screenplay is adapted and delivers a performance charged with emotion.

The scene towards the end of the film where she rants about making tea is particularly powerful and Griffin plays a mother stuck in the middle with real craft. Little White Lies is uncomfortable at times but makes for compelling viewing, with issues of race, identity and discrimination raising important questions about society.

The film ends slightly abruptly though, leaving mixed emotions and a lingering sense of injustice. It raises questions about how much ignorance is a factor in people’s attitudes and why some seem to harbour such a sense of entitlement. Above all though, the film is an advert for tolerance, education and change.

If Little White Lies does win the Amazon Studios competition it will secure a big payday for its creators. More importantly, it would mean thousands more filmgoers get to experience its considerable impact.