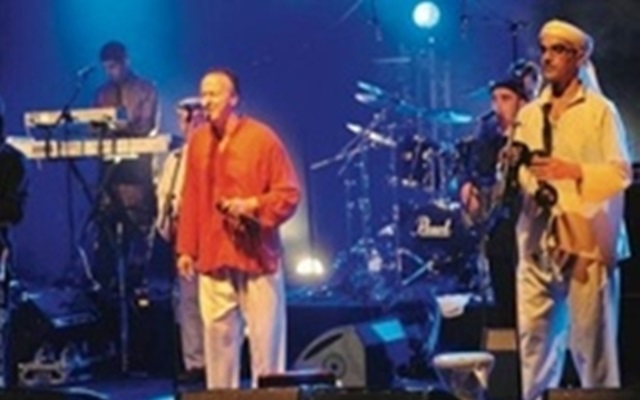 L’Orchestre National de Barbès (ONB) always brings its share of excitement as a band that was born on stage. Their first album was recorded live and remains their top selling to date. Their concert last month was their first performance in London since 2003. They didn’t disappoint, managing yet once again to galvanise their fans with sonorities coming right from North Africa.

ONB arrive before a relatively small crowd gathered in front of the stage. Dimmed blue lights provide a mystical ambience in which the band starts up. The slow and heavy beat of reggae-influenced Chorfa lightly builds up the pressure. Poulina follows with a faster and livelier tempo than usual. The few stubborn fans who had remained seated have now invaded the dance floor. The party has kicked off.

The eleven members shake, bounce, and run like kids in the street of Algiers. If they play western instruments like guitars, synth and accordion, a southern wind also spreads in the venue under the shape of derbuka percussions, a plucked lute guembri or krakebs, a sort of North African castanet. That’s the very eclectic blend that has been the trademark of the group for years.

They offer a varied repertoire, performing songs from their earliest era through to more recent offerings. The audience sings along to the now classic Salam while swaying to the rhythm of newer titles such as the ska anthem Chkoun or Sidi Yahia-Bnet Paris and its Maghrebi-flavoured big beat. A good-humoured political message appears on Résidence, a tribute to African soldiers who fought for France only to be eventually left out.

Where they’re most skilful at is in their ability to drastically change atmospheres rapidly. A good hour into the show, the band transforms the venue in a gigantic traditional gnawa ceremony, immersing the whole crowd in a deep trance. The audience ends up a few moments later amid an old fashion ball in the streets of 19th century Paris, as they perform La Rose.

They wrap up the show with a surprising cover of the Rolling Stones’ Sympathy for the Devil with a dash of Arabic singing.

ONB’s albums have always brought together a vast array of influences, which has been reproduced in tonight’s performance.

“It reflects the cultures of every single member,” said Tewfik Mimouni, the keyboardist. “And there are things we’ve been hiding which might come out later!”

We can only hope that we won’t have to wait another eight years to hear that.

Watch  a clip of the interview below: