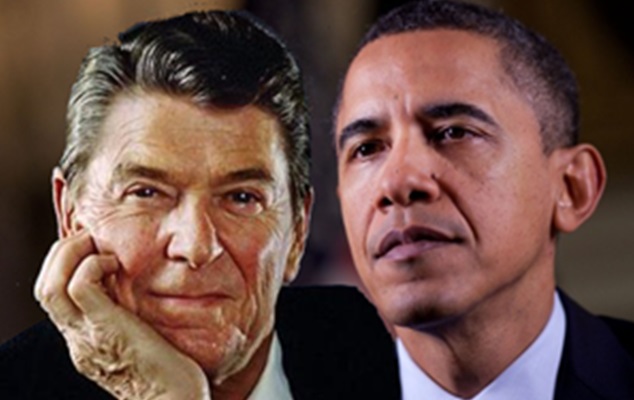 Obama is a black democrat, Reagan was a white republican so why is Obama praising his legacy and endorsing a statue in Grosvenor square?   What is Reagan’s history with regard to black people in America and around the world?

He opposed the Civil Rights Act of 1964 and the Voting Rights act of 1970, stating that the Civil Rights Act was ‘humiliating to the South.’ As governor of California from 1967 to 1975 he persecuted the Black Panther Party going so far as to change the law to stop them from carrying guns.

Bearing arms in public was legal at the time and armed Black Panthers would follow and observe police patrols. This prevented racist police harassment and shootings and brought instant respect and members to the Panthers.

When white militia groups walked about with guns in sight there had been no complaints. In 1967 Reagan signed into law the Mulford Act banning the public display of weapons, which had the effect of disempowering the Panthers and weakening the black community.

Reagan stated that black political activist Angela Davis was a terrorist, sacked her from her teaching post at UCLA then vowed she would never work in his state again. Reagan was President from 1981 to 1989 – what was his attitude to black people during that period ?

He was strongly opposed to affirmative action policy. He fired U.S. Commission on Civil Rights members who were critical of his Civil Rights policies. On Civil Rights leaders he is quoted as saying:

“Sometimes I wonder if they really mean what they say, because some of those leaders are doing very well leading organizations based on keeping alive the feeling that they're victims of prejudice."

He opposed the move to a national holiday in honour of Martin Luther King and only signed it in 1983 after an overwhelming veto proof vote (338 to 90 in the House of Representatives and 78 to 22 in the Senate). When he did sign the holiday into existence in full view of the world media, he was asked whether Martin Luther King a communist. He replied ‘Well we’ll now in 30 years wont we?” and flung down his pen.

In 1983 he decided to invade the tiny Caribbean country of Grenada stating that it “was a threat to the National Security of the United States.” He was against the Civil Rights Restoration act of 1988 and the US Congress had to overturn his Presidential veto to make it happen.

He was well known for the Just Say No campaign and his funding of the DEA (Drug Enforcement Agency). At the same time as being concerned about young America’s exposure to drugs.

Reagan authorised the Iran Contra deal, which, apart from illegally supplying arms to Iran, saw drugs from Central America being imported to black areas of Los Angeles. This led to the crack epidemic which brought death, destruction, misery and imprisonment to hundreds of thousands of African Americans.

It destabilised communities and led to an increase in crime, prostitution, abortions and domestic violence. This dysfunction which was caused by the government’s actions was blamed upon the black community.

The scandal was exposed by journalist Gary Webb and his Dark Alliance series. Black drug dealer Freeway Ricky Ross revealed that the CIA supplied him with cocaine which he turned into crack, making up to three million dollars a day.

To protect his wealth he bought Uzi machine guns and other heavy weapons which prompted other dealers to do the same. His protected drug supply was delivered to US military bases direct from Nicaragua and distributed to Baltimore, New York and Ohio.

White drug dealer Marine Colonel Oliver North supervised this process. Ricky Ross was sentenced to life imprisonment, later reduced to 20 years. Oliver North ran for Senate as a Republican in 1994 and now has a chat show on Fox news.

Sales of the drugs were used to fund the Contras in Nicaragua who were involved in numerous human rights abuses, torture and the deaths of tens of thousands of civilians in a country which referred to them as terrorists.

Reagan excused and patronised the apartheid regime in South Africa. He called Mandela and the ANC terrorists. In an interview with CBS in 1981 he stated he was loyal to the white South Africa because it was "a country that has stood by us in every war we’ve ever fought, a country that, strategically, is essential to the free world in its production of minerals."

He bankrolled a proxy war led by Jonas Savimbi in Angola.  Since independence from the Portuguese in 1975, Angola had taken a stand against the white South African government and supported the ANC.

South Africans waged a secret war against the Angolans using Savimbi as an extension of their army. Reagan funded Savimbi’s UNITA army which meant the war was intensified and lasted longer than it should have.

Tens of thousands of deaths, refugees and disabled people were created by this policy. Angola was further underdeveloped by this extended armed conflict. In 1986 Savimbi met Reagan at the white House

Reagan attempted to strengthen apartheid South Africa by using Jeanne Kirkpatrick, US ambassador to the UN, to fight attempts to impose sanctions. CIA director William Casey was sent to meet his equivalent in Pretoria

In 1986, Reagan gave a speech where he said Mandela should be released but denounced sanctions because they would “hurt black workers”.

Tutu’s response to this was: "I found it quite nauseating. I think the West, for my part, can go to hell . . . Your president is the pits as far as blacks are concerned. He sits there like the great, big white chief of old."

Later that year when Congress actually voted for limited sanctions he used his veto and Congress had to override the veto.

So why is a black Democratic President praising this white Republican President who did all of the above and where is this history in the present media coverage?

Oona King tops our poll of London Mayor contenders
Where is the alternative to AV?
Electoral reform: people not politicians should decide