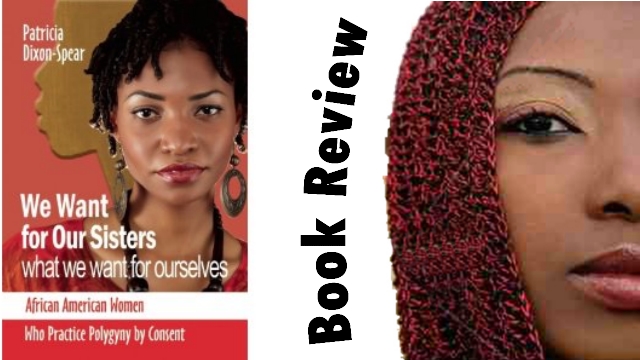 Book Review: We Want for our sisters what we want for ourselves

The first two chapters lay the ground work by defining polygyny while illustrating the historical Greco-Roman attitudes towards polygyny which have been super imposed upon European-Atlantic ideology in general and modern feminist thought in particular.

In this section the author cites an anthropological study in 1967 which concludes that polygyny is practiced in 193 out of the 250 or 84 per cent societies worldwide while exclusive monogamy was only practiced in 16 per cent.

Dixon-Spear infers that this African cultural reality may help to explain the presence of polygyny within the African American community. It also serves as a premise to the theory that European-Atlantic prohibitions on polygyny may have more to do with the imposition of European cultural supremacy rather than moral, religious, or sociological considerations.

Chapter three presents research derived from the US census which confirms the existence of a significant gender gap between African American men and women.

This gap, which has been recorded as early as the 1820 census, has increased persistently since and according to the author has been exacerbated by a present day overrepresentation of African American men in state and federal prisons combined with an above average mortality rate.

Chapters four through seven consist of a series of interviews between activist Trenyaae Bondojia and three predominately African American communities which openly practice polygyny. These groups are the African Hebrew Israelites, the Ausar Auset Community and representatives from the African American Muslim community.

Chapter eight through eleven concluded with a comparative analysis of the three communities, and by addressing the factors which need to be taken into consideration should the African American community choose to consider polygyny as an alternative solution to present day marital issues.

The main challenges of the book are in chapter nine in which the author makes a comparative analysis of the three, above mentioned communities. As Dixon-Spear states in her research limitations, the Muslim sample was an unqualified sample. While both the African Hebrew Israelites, and Ausar Auset belong to a homogenous and hierarchical group there was no indication that the African American Muslim interviewees belonged to an officially organized body.

This precluded the African American group from being evaluated in accordance to a self-stated criterion. To compensate for this, the author attempts to evaluate the group through an analysis of its scriptural sources.

It is based on this analysis that Dixon-Spear reaches the conclusion that the African American Muslim sample to have the “least rigid prerequisites” for marriage among the former two groups. For instance according to the author:

“The guidelines in the Quran focus on the dower, the contract inheritance [and] matters related primarily to rights, but they do not provide a mechanism for African American men and women to make a paradigmatic shift from monogamy to polygamy.”

On page 187 the author analyzes verses from the Quran to support this conclusion. The analysis however lacks depth. For example,  she quotes chapter 4 verse 3 from the Quran which states “Marry two three or four but if you fear you will not be able to do justice then marry one.”

A logical analysis of the above verse finds that marriage is enjoined in the primary context of polygyny and monogamy is enjoined only as a conditional statement. Since this religious injunction does even consider monogamy to be the primary cultural paradigm it is possible that the actually paradigm shift lies within accepting the authority of the scripture.

A second challenge is the author’s treatment of secondary sources. Although her research acknowledges the “prophetic narratives” as secondary sources of authority in Islam, Dixon-Spear makes little reference to these narratives which treat various legal and social topics concerning polygyny.

Given the author’s advocacy for a women-centered approach to polygyny it may have been worthwhile to explore these narratives especially given the fact that one third of them have been transmitted by a woman who is considered by many to be among the foremost scholars of Islam.

On page 268 she dismisses these exhaustive narratives based on her presumption that the interviewees who have made reference to the sources “probably have not read them”. Certain aspects of this omission may have been necessary for brevity and scope, nevertheless these generalities presents an opportunity for the issue to be further explored in light of this information.

In her book, the Dixon-Spear reignites the discussion of polygyny in the African American community while making a significant contribution to a subfield which has yet to be addressed in volume either within academic literature or mainstream publications.

Polygyny, as an alternative has been visited by various African American religious communities, but the author reaches across the religious spectrum and advocates on behalf of the most important focal point of any polygynous marriage, the focal point of the female participant.

Dixon-Spear has presented a work which is scholarly without being detached and free flowing without being simplistic. I enjoyed reading this book and believe that it is a book that a wide range of readers will enjoy.

Book Review: Grow it by Chicoro
New book examines why Britain has become such a diverse country
Changing Lives: Women, inclusion and the PhD

One Comment On “Book Review: We Want for our sisters what we want for ourselves”