The Students Union of University Of The Arts (SUARTs) joined forces with *Shades of Noir to present Already Here. It is an exhibition featuring the work of BAME (Black, Asian, and Minority Ethnic) students and recent graduates from across the six colleges of UAL.

The exhibition aims to inspire students, staff and the general public by celebrating the achievement of outstanding students. It is a multi-layered concept that primarily provides a platform for emerging black artists and designers to exhibit their work at a time when the world is looking to London to showcase its talent and creativity.

The students and graduates hope their work will encourage dialogue in the mainstream around epistemological approaches that influence decisions around the curriculum in arts institutions that too often result in the work of black artists and creative practitioners being overlooked.

Fairooz Aniqa, Culture and Diversity Officer, SUARTs said: “All artists and creative practitioners play a pivotal role in seeking to define and redefine culture and identity. We feel that it is therefore more important than ever that universities and art institutions promote open and meaningful debate about the established and institutionalized concepts of race and identity.”

The exhibition has been on since September 10 and runs until October 27. 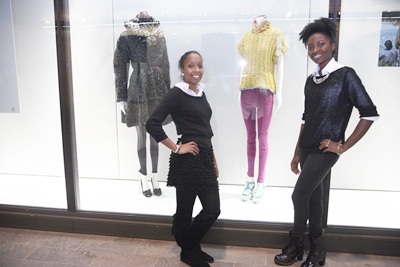 Simone and Montana in front of their knitwear designs

Sicgmone is of Ghanian decent and a recent textile graduate from Central St Martins. Her knitwear design aesthetic has been featured on leading trends website WGSN, and was recently nominated for a frame work of knitters bursary award. Sicgmone recently worked with the west African couture designer, Kofi Ansah in Ghana, where she encountered traditional forms of weaving and sewing in particular the colours and patterns of the traditional ‘ kente cloth’ hand woven by weavers in Ghana.

“I specialise in knitted textiles, i am interested in experimental knitwear and accessories.   The title of my final year project is unravelled Identity. The aim of my project was to explore the ideology and interlocking between both my Ghanaian and English culture, inspired by my visit to Ghana.” http://showtime.arts.ac.uk/SicgmoneKludje

Montana is also a recent textiles graduate from Central St Martins and for her final year project she designed textiles made from upcycled material that would have otherwise been discarded as rubbish.  Her work was shortlisted for the finals of the UK Knitted Textile Awards.  “For my final project I explored the ideology of making recycled materials appear beautiful. I wanted to challenge the way that "Rubbish" was perceived within the fashion and textile industry. I decided to surround my project with the idea of using materials which society today usually discard and disregard. I also wanted the way in which I use the recycled materials not so obvious and somehow wished to play around with the overall portrayal.  ”

Montana uses materials which can be found in everyday life – such as cassette tapes which she used to weave her textiles for this piece.  She hopes to cause a reaction from the audience, inspiring them to think about the levels of waste and environmental degradation that we as a society inflict on the planet and our natural surroundings. “Sustainability and recycling how easy it really is to maintain if we all began to do it, we could make a big change.

Both works have been made in homage and in response to a work made by the late fashion photographer Helmut Newton for a Vogue magazine spread.  Ope’s work aims to challenge western perceptions of beauty and femininity, by creating an oppositional gaze, through the appropriation of and inversion of images like the works of Newton, which posit the white female body as spectacle, as the object of the gaze. Here Ope challenges that gaze, through inverting the original, which had a group of men looking at a lone white female figure.

In both images there is an omission of the male body, which already throws the politics of the gaze into disarray, as it is based on the fact that men do the looking and women are seen to be looked at. (Mulvey 1989) ‘After Newton’ shows the tables being turned, however, the looking and being looked at is being done only with women, with the main difference of race. In After, After Newton, the tables are turned once again. By playing with these configurations, the question of whom these images aim to please, who they are being made for and questions of who is afforded power from this play in the look are addressed.

“I have been at UAL since 2002 and during my time of study from undergraduate to postgraduate and now research, I have always been in ore of some of the high profile black British artists who have attended the university. I take pride in the fact that now at CCW graduate school, I’m walking in the same footsteps as artists such as Isaac Julien, Chris Ofili, and Yinka Shonibare and have had the privilege of being able to connect with female artists such as Sonia Boyce (MBE). “

Ope is a full-time final year PhD candidate at CCW (Chelsea College) Graduate School and has studied previously at CSM for her Foundation and BA, and gained a PGDip and Masters at Chelsea College of Arts and Design. Her practice-lead research topic looks at the uneven distribution of power between black and white women in Western visual representations, whereby white women are seen historically as the feminine and spectacle and black women are seen as the non-feminine and the un-spectacular. She engages with an image making practice, where she is fully aware of her role as an agent of social change, using the power of images, video and photography to create subject positions. To help create new feminine identities that challenge boundaries.  www.opelori.com 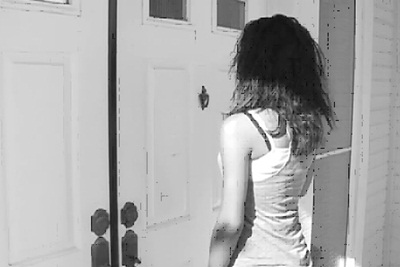 Lauren has just graduated from MA Art and Science at Central St Martins.  She is primarily interested in the subjective characteristics of the moving image and the various correlations between temporality, perspective and dimensionality.  How personal experience(s) affect the outcome of the original intent and when, in real time, we experience these shifts in perception. The relationships created between the viewer and the image that can’t be recreated or duplicated. Something only felt by a single individual experiencing those particular transient moments. A combination of their past, present, and future reflections, of which are continuously shifting. Currently, her research is focused on investigating ways to isolate light in real time to allow it to visually suspend in multiple dimensions. Determining how to eliminate the screen to encourage individuals to physically interact with information, she wants individuals to encounter these various perceptions. Focusing on movement, form, and space, she wants to explore how to further create this relationship between the viewer and this intangible material.

Trapped (2011) uses a free write as a basis for narration, relating with how we simultaneously meet our past and our future and thus barely existing in the present. The characters, have yet to meet one another until present brings them together.

19 Visa's, 3 passports, one foot in Europe, one foot in Africa, and an abundance of stories before the age of 24. Fort Rixon is a purveyor of Hand Rendered Afrographics.  He grew up in the City of Kings under blazing blue skies, listening to the endlessly colorful stories of his parents. Eric Clapton and Johnny Clegg played in the background whilst driving through the bush in Southern Africa, Joni Mitchell whilst flying over the milky skies of Europe, Bob Marley whilst training through the eternal sunshine of the American West Coast and old War songs when the boys played football in the valley. As a result his inspirations are many; from History, 60's & 70's neutral colortones, to African Babershop Sign Paintings, Old School Afro-graphics and Township colors, to Old Hip Hop Flyers and most importantly, the power of words.  He hopes that in each project he encapsulates a beautiful harmony of imagery, words and the sui generis nature of unique color combinations.

The image he created especially for Already Here is inspired by Mr Chinwag who was a character on the ever popular early 90's childrens program, Kideo, produced by the legendary Louise Smit; a pioneer in childrens entertainment in Southern Africa.  Mr Chinwag was to many children of the born free generation the first televised character that could be connected to the idea of civic duty; that being loving your home, your town and your country. For a fictional character, he certainly had a lot to say about life, and how we all need to play a major part in it,  instead of step back and watch (my favorite line being of course "litter makes me bitter" Prior to Kideo, there were very few if any locally produced programs for children, most being brought in either from the UK, mainland Europe and some situations, cartoons from the Eastern Bloc. This piece is designed and aimed at that generation to whom Mr. Chinwag is familiar as they have grown up in society and will very soon be in (if not already), be in positions of leadership and influence in their cities and countries. The message is a clear and simple, " We can do this together, because we are made strong… ". A simple reminder to those who know his voice, to remind them of the courage and audacity of their childhood.

Chinese born artist Tom Wu, is currently studying BA Interior Design at Central Saint Martins, were his focuses on concepts of displacement and the evolvement cultural values throughout social history. His Where is Ai Weiwei (2012) is a manipulated image ‘Dropping A Han Dynasty Urn’: a self-portrait by the recently incarcerated artist, Ai Wei Wei.  When he was arrested in 2011 Tun made the image in support of his campaign for freedom. “I digitally removed his body from his original photograph to describe his missing- the broken urn was still there but Weiwei was gone. Unfortunately it was impossible to post it in China but I was able to show the image to Weiwei over the internet and he was very happy for me to exhibit it here.”

These four shirts are taken from Anjali’s work for a Neighbourhood Colour Project.  Initial inspiration for the prints and design was taken from the glossy doors in Notting Hill.  She then conducted an exploration through photoshop to create a digitally metallic collection of menswear.

A graduate from Chelsea College of Art & Design, University of the Arts, London in BA(Hons) Textile Design. Her graduate collection, part of which is exhibited in Already Here, was entiled Nomadic Voyage.  It is an exploration of Nomadic travellers, inspired by the relationship that Berber tribes have with vast lands. Bringing together an eclectic menswear collection, with a mix of digital print and screen-printed textures expressing notions of long lasting and durable material.  anjalidsouza.blogspot.co.uk/

Jeremy is a passonite illustrator and designer who is inspired by how his feelings ,thoughts and emotions  could be recorded as visual message’s .He also learnt how (not to be a cliché ) a picture can tell a thousand words, not only about what the picture was but the aspects of the person who created it.

As a child her was was obsessed with art  and learning, whilst still searching for a purpose in life .He found his calling after careful contemplation  and seeing how he could combine ,the Maths,Physics,Economics,Media and Art and Photography to communicate . He has studied at Central St Martins and is currently a student at Camberwell College

Despite having not even completed his degree he has already been commissioned to produce illustrations and graffiti instillations.

*Shades of Noir is a movement for change at University of the Arts London to improve career outcomes for black and minority ethnic students and graduates in arts and media higher education and within the creative industries . For more information visit the website.