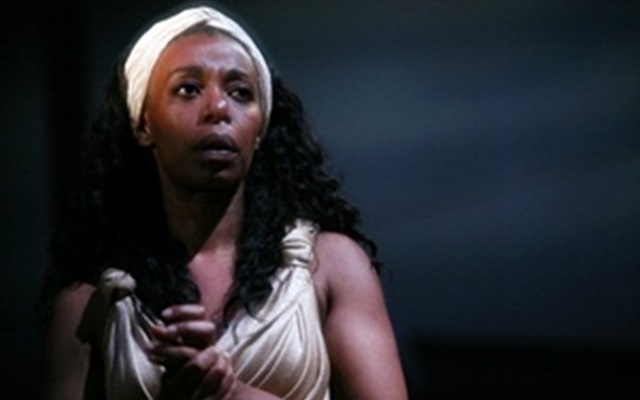 Three quarters of the way through the Royal Shakespeare Company’s (RSC) London Roundhouse Season actor Noma Dumezweni can relax for a bit.  Appearing in three of the Company’s six productions the Swaziland born, Suffolk-raised actor is excited about the next phase of the Season’s tour back at the RSC’s reconstructed and soon to be relaunched theatres in the company’s Stratford base.

After that homecoming – where Ms Dumezweni will reprise her roles as Nurse in Romeo and Juliet, Paulina in The Winter’s Tale, and Calphurnia in Julius Caesar – she joins the rest of the ensemble with a farewell residency of the complete season at New York’s Lincoln Theatre.

I spoke with the actor during that warm and fuzzy end-of-term period between Christmas and New Years Eve whilst she was enjoying a meal with friends. Neither a busy restaurant, a bout of illness over the festive period, nor a crackling mobile connection could disguise her bubbly and exuberant personality.

We began by talking about the Roundhouse Season.

“It is all going really well. This season is amazing [and] I’m very lucky to be doing the plays I am doing and the parts I am doing. Coming up from Stratford you realise it is a different energy as well; London audiences are so attuned and after the first couple of days we realised we had to refine what we are doing – it is just a different form of story telling.”

The actress was never daunted by the intense preparation process that sees an ensemble of 44 actors playing 228 roles over six productions, as well as adaptations of A Comedy of Errors (1 February) and Hamlet (26 January) which target younger audiences.

Performing in three of the plays she is emphatic in describing how quality rather than quantity inspires and motivates her: “It boils down to participating in a great bit of storytelling. It has been a real pleasure; I am really so lucky. My idea of hell is doing one play for ever; [because] you get stuck and bored; it is not satisfying.”

With the growing anticipation for the New York tour the fortysomething actress knows she will face a new energy in The Big Apple; one certain to be as different to the London vibe as the capital city is from that of the historic home of Shakespeare. “It is the most extraordinary job and we’ll be finishing the whole gig at Heathrow Airport collecting our baggage,” she explained.

Dumezweni – a Xhosa word translated as ‘famous in the world’ – won an Olivier Award in 2006 for her portrayal of Ruth Younger in the Young Vic’s production of Lorraine Hansberry’s groundbreaking classic A Raisin in the Sun and has appeared everywhere from provincial arenas to the prestigious National Theatre. With an impressive body of Shakespearian experience that includes Antony and Cleopatra, Much Ado about Nothing, Breakfast with Mugabe Macbeth (on stage and screen) – as well as the aforementioned roles in the current Roundhouse Season.

Since joining the RSC in 2009 Dumezweni has became one of a privileged group of actors who enjoy the stability, professional development and superb productions which ensemble work usually brings. And she has sharpened her skills with peers who are at the top of their game.

Acknowledging the diversity of the RSC ensemble, and the variety of roles she her self has tackled she is not complacent about the quality of roles for actors of African descent in British theatre. “What would be great is if they have me playing the next Cleopatra,” she thinks out loud.

With family origins in South Africa she lived in various African countries before settling with her sister and Mother in England and is impressed by the developing genre of work covering the Black experience in Britain, citing several well known writers.

Women’s voices are not as prominent in this field and her optimism about the future for theatre is seasoned with hope that this wave will unveil the work of even more female writers. Generally speaking though this versatile actress is an advocate of hard work and perseverance.

“You have got to hang in there for the long term and [you] will make it eventually. I think as a creative being you have to get out there and do it; you [have] got to think about the long term.”

Film Review: Journey to Mecca: In the Footsteps of Ibn Battuta
Film Review: Agadez:The musician and the rebellion
Music Review: Tassili by Tinariwen