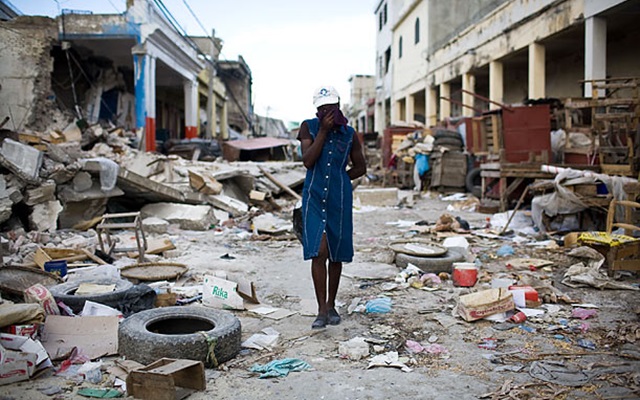 The notion taught in European institutions is that benevolent white men abolished slavery because it was a scar on their conscience. The facts are that enslaved Africans fought back at every opportunity and the Haitian revolt of 1791-1804 led directly to the 'abolition' of the British slave trade in 1807.

The Jamaican uprising led by Sam Sharpe in 1832 scared the British into passing the law to 'abolish' slavery itself in 1833. Alleged abolitionist Wilberforce, apart from suggesting that black men be used as breeding animals actually voted to send 60,000 British troops to force the Africans in Haiti back into slavery.

In the 21st century the IMF and World Bank present themselves as benevolent agencies while the evidence shows their policies actually make people poorer and increase the wealth of the US and Europe. See below for details as to how Haiti was forced into poverty by the very nations who are now complaining that Haiti is impoverished.

On August 22, 1791, the Haitian War of Independence began under the leadership of an African religious leader named Boukman; over one hundred thousand enslaved Africans rose up against the French army. The great hero of the Haitian Revolution and a man considered one of the great revolutionaries and generals throughout the world was François Dominique Toussaint L'Ouverture.

When the war of independence broke out in August 1791, Toussaint was a fifty year old carriage driver. He rose to become a general when he realized that the revolution could only be successful if the enslaved Africans became militarily and politically organized to resist the external forces.

His first move was to train a small armed group. He then realized that the Africans, who now occupied the eastern two-thirds of Haiti (what is now the Dominican Republic), were caught between three contending European forces, all of whom wanted Haiti for themselves.

The French, of course, wanted Haiti back. The Spanish and English saw the revolution as an opportunity for seizing Haiti for themselves. Toussaint's great genius was to achieve what he wanted for his people by playing each of these powers off against each other.

Toussaint was a brilliant and charismatic statesman and leader. His reign came to an end with the rise of Napoleon Bonaparte in France. Napoleon sent General Victor Leclerc with over twenty thousand soldiers to eliminate Toussaint, who then waged guerrilla warfare against them.

Eventually he made peace with the French and retired from public life in 1803. The French tricked him into a meeting where he was arrested and sent to France where he was starved and tortured to death in prison. With the death of Toussaint, the revolution was carried on by Jean-Jacques Dessalines.

Dessalines was extremely angry over his treatment as a slave and was determined not to allow white people to carry on with their racist exploitation. Leclerc was desperate, as his men were dying of yellow fever and the guerrilla attacks took a surprising toll.

So he decided to simply execute blacks whenever and wherever he found them. Dessalines responded that every atrocity committed by the French would be revisited on the French. As the fighting wore on, Dessalines ordered the summary execution of all Europeans that opposed the new revolutionary government.

Finally, on January 1, 1804 Dessalines declared Haiti to be an Independent Republic. He took the French three-coloured flag and removed the white from it to produce the bi- coloured flag of Haiti, the first independent Black nation in the Caribbean.

Africans had defeated the best French, Spanish and British armies and sent shockwaves through the white supremacists in the Caribbean, Europe and America. The slave masters in the immediate region were terrified that the same thing would happen to them. The British, with their nearby colonies of enslaved Africans, were extremely nervous in 1804.

Immediate after- effects of the revolution

The aftermath of the Revolution had other impacts on Haiti. Haiti was in forced to pay a total of 150 million Francs to France for fighting against slavery. The USA endorsed this. The last payment was made in 1947. (President Aristide actually asked for it back in 2003) The equivalent in today's money is $21.7 billion: according to Dr Francis St Hubert of the Haiti Restitution Commission. This is based on 5 per cent annual interest.  If the normal 7.5 per cent interest were applied, Haiti could be entitled to $4 trillion.

The situation is comparable to the Germans demanding compensation from the British for fighting back in WWII. If that had happened how underdeveloped would Britain be and how overdeveloped would Germany have become?

Haiti is forced to borrow from French banks at high interest rates to pay the money to the French, forcing Haiti further into poverty.  The US Marines invaded and brutally occupied Haiti in 1915- 1934, because Haitians refused to allow foreigners to own their land.

US corporations were later brought in to establish plantations and jeans factories that used slave-type labour. The USA and France supported human rights abusers like dictators Papa and Baby Doc Duvalier in the 1950's and 1980's who ripped off their countrymen and took out loans from the IMF.

After the US-backed dictators were deposed Haitian people were forced to pay up to 2 million dollars a year on bad debts incurred by the dictators.  The US 'encouraged' Haiti to lift its tariff on imported rice,  which flooded the market with imported subsidised US rice forcing local farmers out of work and off their land. The US companies then hiked their prices, forcing people to eat mud cakes

In 2003 democratically elected Jean Bertrand Aristide requested that France pay back the reparations it received. He also campaigned to increase the minimum wage to $2 a day.The US government repeatedly destabilised the democratically-elected government of Aristide until he was finally ousted in 2004.

He sought sanctuary in Jamaica but Condeleeza Rice threatened the Jamaicans with dire consequences if they allowed him to stay. He eventually ends up in South Africa but was not allowed to return until 2011 – long after the earthquake.

This may help to explain why Haiti has gone from being the richest island in the Americas in the 1790's (hence the scramble for the island by France, Britain and Spain), to today being the poorest. Much of the absent infrastructure which is so often mentioned by the media would be present but for the above.

What the International Year for People of African Descent should mean to us all
Godmother of Rock n Roll: Sister Rosetta Tharpe
UNIYFPAD: 400 Years of Black British Civil Rights

5 Comments On “Why is Haiti so poor?”