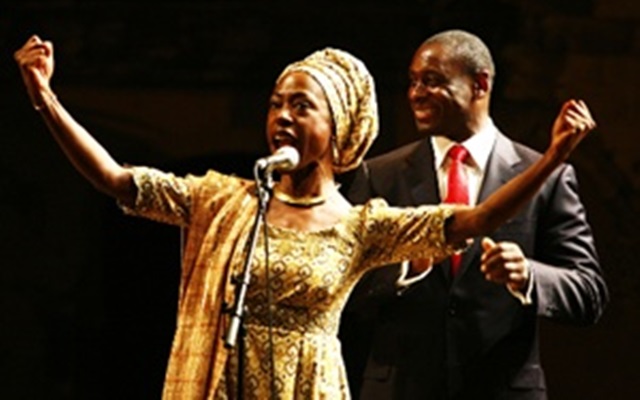 Interview with David Harewood and review of Welcome to Thebes

Welcome to Thebes is the latest in a genre of plays looking at Africa through liberal interventionist lens and follows in the footsteps of The Overwhelming, Ruined, Breakfast with Mugabe and The Observer.

Inspired by Greek mythology, written by Moira Buffini and directed by the acclaimed Richard Eyre, the play portrays a female president – Eurydice, struggling to exert herself in a male dominated political world.

Athens, a global superpower with parallels to the modern day US, led by David Harewood’s Theseus, is where she seeks potentially compromising help. Alongside a company of 26 actors, the Royal Academy of Dramatic Arts (RADA) educated actor is devoting all of his energy to the gruelling but enlightening rehearsals for Welcome to Thebes.

In the hands of award-winning director Richard Eyre, (The Observer) Harewood, whom I spoke with over the telephone during a break, is up for the challenge.

“It’s a big piece about a whole range of different subjects: women in politics, war, the state of Africa, the relationship between Africa and the West. It encompasses a lot of very topical, deep and far reaching subjects.

“That’s what is so brilliant about Moira’s play – it manages to tell all of those very modern stories in a neo-classical setting. It’s a fantastic achievement.”

The father of two, whose roles have been mostly as serious as he himself appears to be, is reflective and thoughtful. It’s a characteristic mirrored by his responses, which are all carefully packaged and eloquent.

“Because we’ve had the writer in the room with us all the time it’s been a really collaborative process,” he explains.  “We watched a film about Charles Taylor: Pray the Devil Back to Hell about the situation in Liberia. It is also a dedication to those women of Liberia who basically stood in front of guns and marched in front of guns to end the civil war there.”

Theseus could be seen as any number of US Presidents leading a McDonald’s like chain of global military bases and a history of covert and overt military interventions,  and Harewood, in giving life to the mythical Theseus, looked to Barack Obama in constructing his role.

”Theseus is basically the Leader of the Free World… who has free reign to do whatever he pleases; but as with all of those Greek heroes he comes rather unstuck at the end of the piece.

“I have taken a little bit of Obama, being a popular black leader, but he (Theseus) has arrogance all to himself that I have had to create myself.”

The forty something actor has already portrayed Nelson Mandela in a recent TV biopic of the South African leader’s former wife Winnie. (played by Sophie Okenodo) His depiction of Martin Luther King in the Olivier award-winning production of The Mountaintop was highly praised.

Now adding an equally authoritative, but perhaps flawed Theseus to his repertoire, the star definitely has an affinity with these roles.

“I do like playing strong characters. I like to fill them with a certain amount of humanity. I think that’s the interesting thing about the process – you start with an icon, or a character on the page; and it’s about putting flesh on the bone.

“With someone like Martin Luther King, before I played him he was not just a myth, but an icon. The more you read about the man the more you understand he had insecurities, fears, worries.

“It is so easy to idolise people in this culture of celebrity; [but] it is about humanising them. I really enjoy that process where you can pour all of your own insecurities, all of your own fears and worries into the character. If you play it the right way it adds certain humanity to these historical figures."

With Romeo, Othello and Roman General Antony already on his impressive CV, he’s enthusiastic to tackle other world leaders as well. Whilst Mandela and Martin Luther King are seen in a saintly light, Harewood is not afraid to play those with a less pleasant reputation either.

He mentions Charles Taylor, ex Liberian leader currently facing war crimes charges in The Hague, and current president of Zimbabwe Robert Mugabe as subjects he would like to tackle.

He is equally at home with the historical and political exploration that is necessary for the roles he is offered and sees this aspect of his work as energising and vital.

“One of the lucky things about being an actor is you never stop learning; you keep on growing.  It’s a wonderful profession.”

This deep research into the environment of the character he is playing is an aspect of his work that he regards as especially intriguing and essential to the quality of his performance.

“There is no way you can attempt to play any character without really researching what the character is talking about. It’s a good idea to immerse yourself into his thinking and what he achieved.

“When I played Mandela I think I fell for the whole 1990s ‘Free Nelson Mandela’ and it was only when I read his autobiography and the history of South Africa that I realised what kind of miracle it was.”

Whilst the actor has made a name for himself playing Shakespearian classics, he’s equally adept at playing figures such as Friar Tuck or the notorious Captain Poison in Blood Diamond.

Having worked on stage, for the small screen and on more lucrative movie sets he accepts that each requires different skills and understands the pressures and challenges of the different mediums – not that is worried about being typecast.

“That is just what has come up,” he acknowledges. “I am sure if I was whisked off to Hollywood I would enjoy that as well. Everyone’s journey is different. I would never like to leave the stage because the stage is such a fantastic thing.”

Having himself played Friar Tuck, the much loved figure of English folklore, it appears as if colour-blind casting has achieved a strange victory.

“It’s important that if you are going to make drama it has to speak to a modern, diverse audience and society – and to be bold with it. A couple of months after I finished Robin Hood when it first aired I walked into my daughter’s playground and the kids went absolutely nuts. They didn’t care if he was black or white, all they cared about was the character. “

With opportunities for black actors in the period dramas Lord of the Rings and Sherlock Holmes – type movies that roll regularly off the production line temptingly close, but just out of reach, perhaps the next barrier to break down is that of equal recognition.

Recognising the breakthroughs which have already been made he concedes that commercial decisions very often override artistic ones at the development and casting stage.

“People are terribly afraid of taking risks, particularly now. They don’t want to rock the boat, so I don’t think we will be getting any black James Bonds in the next couple of years.”

Having toured internationally with world renowned actress Vanessa Redgrave in Shakespeare’s Antony and Cleopatra in the 1990s the actor is heartened by the increasing numbers of back people joining the profession since his stage debut almost two decades ago.

“It is wonderful to see. When I started there were hardly any. [Now] there is a generation who don’t see a colour bar or a barrier to going off to Hollywood or the West End or The Royal Shakespeare Company; it is great that they feel so involved and we should encourage that.”

With African-American playwrights enjoying acclaim in Britain, Harewood, Gus in hit TV series Babyfather, appreciates the commercial potential and success, albeit one-dimensional, of recently made films in Britain but he is a little bit frustrated at the theatrical counterpart.

“Our whole experience here is something that hasn’t yet transferred to the stage; to film maybe a little; but it’s still only a little. Perhaps we need to concentrate on the emerging middle class… we don’t all wear hoodies and shoot each other.”

And as commanding alpha male Theseus in Welcome to Thebes Harewood is sure to prove that.

The Olivier, The National Theatre, until August 2010
www.nationaltheatre.org.uk