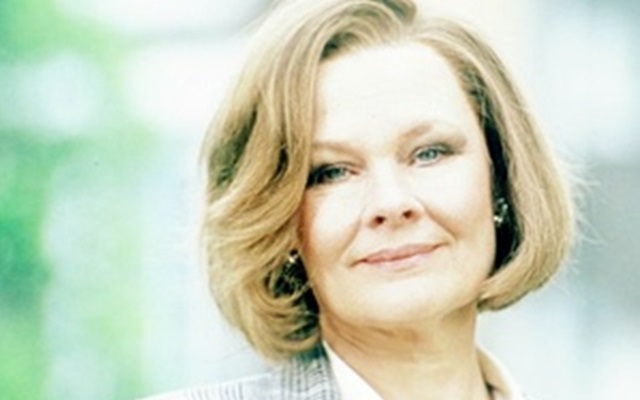 Dame Judi Dench stars as Bridget in this four part drama adapted for Channel 4oD from a novel by Catherine Heath. It charts the story of a dutiful, upper-class wife and mother whose husband Mark discards her for a new, young wife, Rebecca.   The series is set over four episodes.

Five years after her divorce, Bridget is living on her own and seeks to improve her life by getting involved in some adult education programmes, including a pottery class. In a chance meeting with her local pastor, he suggests she attends services at a primarily black church in Croydon.

She does this but is unsettled by the young American pastor Daniel (played by Hugh Quarshie of BBC’s Holby City fame) who sees her as an intruder.   She accidentally leaves with a Bible loaned to her by a  church member. Weeks later, Bridget stumbles across the bible and asks her daughter, Phyllida (played by Francesca Folan), to return it to the pastor. She promptly becomes obsessed and starts to pursue him romantically. But he turns her down politely and she accepts that it is not to be.

In Mark’s household, there is trouble in paradise. He lives with his elderly mother Frieda, who is acid-tongued and demanding. Whilst she remains devoted to Bridget, she detests Mark’s new partner and does everything in her power to break up his new marriage, even witchcraft!

Bridget recognises that being alone makes her feel emotionally isolated, and that she is becoming unstable. She stops living by other people’s expectations – she breaks rules, takes risks, lives by her own instincts – in effect, she thoroughly scandalises her family and friends by her behaviour.

Frieda is left on her own when Mark takes his new wife on a city break to Paris. On their return, they are horrified to find Bridget has moved back in and intends to stay indefinitely.  Bridget resorts to caring for the entire household, not just Frieda, and actually becomes friends with Rebecca – in what can be regarded as a very bizarre set of circumstances.

In a turn of events, Phyllida returns home from work one evening to find that her flatmate, Serafina, has let Bridget into the flat – complete with her belongings. This presents a problem for her flatmates as there is a space issue. One flatmate, Giles, recently had his grandfather unceremoniously dumped by his father to be cared for whilst he went to the Continent for a business deal.

Notwithstanding, everyone thinks it is a great idea having Bridget join the household so she remains there and again assumes the role of carer, looking after Giles’ grandfather.

Over time, a relationship starts to develop between Giles and Bridget. Giles has long wished to return to California where he grew up as a child. He misses the weather and the laid-back living, but cannot make a move while his grandfather needs care.

Then tragedy strikes when Giles’ grandfather dies, which allows him to rethink his California plans. Bridget, too, is ready for a new adventure and offers to go with him. She decides to sell her flat and start life afresh in a new country.    This, of course, alarms Phyllida and her ex-husband, the latter thinking it a foolish idea and that Bridget is carried away with the idea of ‘dating’ a younger man.

Judi Dench shines as the main protagonist in the film, but there are equally strong performances from Joely Richardson and Gwen Watford.

There are many twists and turns in the plot, which also focuses on Phyllida and her flatmates. Whilst Phyllida is relishing her independence in her new job, her flatmate, Serafina (Richardson) is a nervous wreck, who is taking a break from her teaching job due to stress.  Giles is an interesting character, who enjoys having relationships with women and men. The cast truly shine in their respective roles throughout the series.

This is a light-hearted series which covers love, loneliness, issues of morality, friendships and family.  I found it very charming and thoroughly recommend it.

SupaKids to take to the stage at London’s Park Theatre
Music Review: ONB in London
Going the extra mile to support black films