The recent social disturbances in English Cities has been fallaciously described by the ultra-conservative historian Dr David Starkey as a case of young white people losing their identity hence becoming black and following the black fad, literally.

These unfortunate remarks were made on a BBC Newsnight programme where Dr Starkey was giving his personal take on English society as it is now post the recent troubles. It is important that the word ‘riot’ is carefully avoided because there were so many different ways of recording these events.

But for the sake of a long-term picture of the future of England and its other sister nations, ‘troubles’ is a necessary and justified term, because the politicians and majority of the mainstream media- enslaved public have bought into the idea that there is nothing political (no troubles) in the recent events.

First, let’s look at the common myths being fronted by Starkey and other historical revisionists – the idea that these troubles were about black people looting from hardworking white people.

On the subject of looting, this was straightforward indiscriminate; multinationals were targeted, family businesses and various franchises and companies in the service industry fell victim. So identifying the victims as whites is quite simplistic.

There were tragic fatalities; three young men of English-Asian descent, a white man and the unexplained death of Mark Duggan in whose name the protests descended into disturbances. Families are now mourning these untimely deaths. 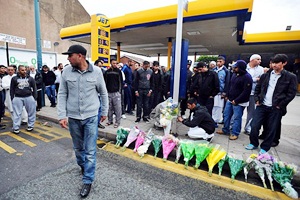 The second reason for rubbishing Starkey’s racist premise is the misuse or misinterpretation of the transformative, influential and powerful yet misunderstood black culture.

To say that it was black culture on the loose during the last few days was playing mischief. Historically, it is well known that the riots took place in the 18th and 19th centuries and were always receded with calls to address worker grievances and protests – including during the industrial revolution. There were no organized trade unions.

Looting is also not new to London. It was the order of the day and hundreds died. Between 1815 and 1848, there were about a dozen variously themed protests of significant proportions that led to mass riots in various parts of England. In terms of culture thus, it is impossible to find something uniquely peaceable and English about the mannerisms in which these 19th century disturbances were conducted.

Starkey has yet again perfected his intellectual gymnastics, he has got his audience, but many more would probably not ‘pay’ to hear him. Extreme in his views against the black community and momentarily changing gear to look neutral-“black and white are in this together”, the historian has a way of fooling the public into seeing a duality in his utterances, sometimes good and other times distasteful.

When he means for example that the substantial section of English whites have become blacks; violent, destructive, nihilistic, and black in culture, it is hard to reflect on this without being persuaded that the man is too obsessed with colour and race. His emphasis is that this disreputable black culture has now become fashionable among English youth.

How is it possible that there is such a sickness called black culture that English whites have imbibed? Starkey blames hip hop and what he calls black rap music, the same educational lyrics made by the likes of Lauren Hill, Jay-Z et al that have positively engaged with youth, black or white. There is no black in the Union Jack and no black in the English George Cross and these are not just symbolic elements of how people see themselves.

Historically these national symbols cannot really practically describe the other sub-cultures black or white. This theoretically means one thing, was there such a thing as the English Riots or not?  Equally the young black and white have some shared history too, if the colour content was left out of it especially now that recession is determining their immediate future.

It is so senseless for a man honoured for his apparent historical analyses to come up with something called ‘black culture’. It doesn’t require a lot of deep thinking to understand that cultures are diverse within all races – none has a homogenous characteristic. Starkey’s performance on the Newsnight programme did some disservice to the hope for a sensitive intellectual contribution to cohesion among people of different cultures.

The English Defence League and the British National Party must have enjoyed every minute of Starkey’s rants, which beggars the crucial question; do intellectuals always have to sound controversial in order to justify their paid existence?

When the man argues that black culture and not skin colour is the overriding factor in the recent troubles, the racial intent makes him believe that white people – not white culture cannot be equated to mass disturbances.

It is only a traditionalist, ultra-conservative thinker that can repeat the notion of the disturbances being absolutely superficial without legacies and shadows of misrule by both Labour and Conservative governments.

He still does not tell his audience what is this supreme English culture that black people don’t have and which has now been diluted by the blacks actually is. He forgets that racial hierarchies are what have led to institutional racism by major players in the private and public sector today. Black people are still largely unemployable if a racial template is to be used by companies or governmental recruiters. This problem has perpetuated a ‘them’ versus ‘us’ culture.

At one point on Newsnight, the historian makes a bizarre reference to a wholly false Jamaican Patois, intruding in England and with its fake-ness, creating a cultural mess vis-à-vis, the disturbances. Why does he think that Patois is fake among youth and that his public school English is supreme?

For arguments sake, English is not an island standing on its own. It is a language and sub-culture heavily borrowed from outside; German, French, Latin, contemporary culinary Indian and so on. Starkey’s illogical comments will not be sufficient enough to create a new wedge that maligns Jamaican and other black Diasporas or even other generations of the black ethnicity. He will have to wake up so early to succeed because people are too smart for these historical and pseudo-scientific theories.

When Starkey made a bizarre comment about the black Tottenham MP David Lammy, “his voice sounds white, if he wasn’t on radio one would think Lammy is white,” and this assertion is the traditional English obsession with class divisions. Of course there are black middle classes in England, yet it doesn’t really matter that they happen to be black let alone how they speak. Does Starkey think every white sounding person sounds English and not White Polish etc?

The dust has not fully settled. But even though it is now acknowledged by the mainstream press and court reports that majority of the defendants are black, this is not by default. Also, class divisions were not obvious as primary reasons for the troubles.

However, the majority were people from poorer backgrounds. It is not wise to make racial these virtual demographics that we see on television. One may want to ask if the television cameras were deliberately focusing on black people to make the point. It is not a numbers game. If there was one white face in every five, this should not mean that black people are inherently criminal, arsonist, murderers, rapists and looters.

Elly Odhiambo is a Northern Ireland based writer and researcher.

Diane Abbott right to call for race and gender checks on job cuts
To be or not to be: homophobic
Glossing over Africa’s image