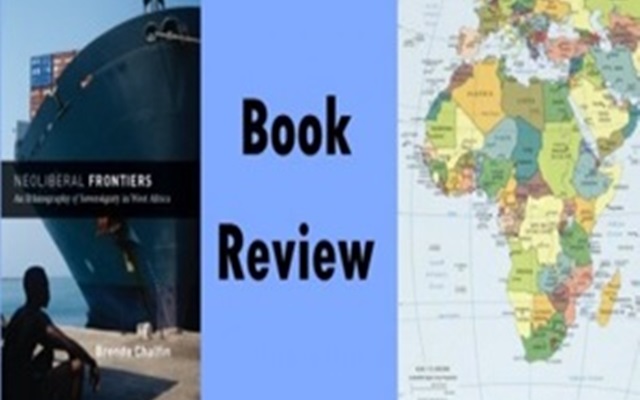 Neoliberalism has had a central place in economic rationale for the past forty years. In Neoliberal Frontiers, Brenda Chalfin gives a great insight of what it means in specific interventions. She analyses how Ghana renegotiates its sovereignty in a seemingly economic laissez-faire context.

Since the mid seventies, the International Monetary Fund (IMF) and the World Bank have encouraged neoliberal policies in crisis-wracked developing countries. Such words as efficiency or good public governance have fostered the rolling-back of the state to encourage private service-oriented domain in public activities. For instance, aid programs have been granted from international institutions to developing states, conditional to a strong restructuring of the state’s institutions.

In Ghana, following the economic collapse of the seventies, Jerry Rawlings ascended to power through a coup in 1981 and later negotiated a structural adjustment plan with the IMF. The plan’s terms involved the development of the private sector in fields such as social services or customs, the latter one being the subject of Neoliberal Frontiers. The author’s study focuses on the effects of neoliberal policies in regard to Ghanaian territorial sovereignty.

Brenda Chalfin is not a stranger to Ghana. As an economic and political anthropologist, she has specialised in West Africa, and particularly Ghana. Through a two-year study, she has acquired an in-depth knowledge about practices at territorial borders, which is felt throughout the whole book.

Over seven chapters divided in two parts, the author explores several aspects of Ghanaian customs. She starts by contextualising her research within the broader Ghanaian history of the past three centuries, from pre-colonial time and the expansion of the Asante Empire in the eighteenth century, to the more recent post-colonial events. She asserts that the current neoliberal process cannot be considered on its own, as it has been influenced by wider past episodes.

In part two, she takes the reader to the specific fields she studied, namely a border point, a harbour and an international airport. If neoliberal reforms imply simplifying heavy bureaucracy, the author’s approach stresses the equal importance of people who are usually seen as mere target of these reforms, but whose agency has in fact a significant role. The outcome quite pertinently displays the actual dynamics at play, as well as their cultural and ideological dimensions.

Where Chalfin is most skilful is in highlighting the contradictions of neoliberal regulations. A broad range of actors, recipients, organisations, or bodies are involved in such programs, all of them with varied and sometimes conflicting interests, yet policy makers at international level come up with uniform plans which they believe should apply everywhere. But this logic fails to comprehend the complex nature of the social world on the ground. Hence Chalfin notes that attitudes vary tremendously in the various sites of her study, which renders irrelevant the application of monolithic measures.

Chalfin’s examination of customs services’ practices in Ghana reveals complex patterns. Territorial sovereignty has traditionally been a defining attribute of the modern nation-state whose control over what comes in and out of the country has been of great significance in this regard. However, economic globalisation has fostered a facilitated flux of funds and commodities; it has blurred the very notion of frontier. With the decline of older means of border control, transformed political tools for the production of state effects then emerge. In Ghana, the population reshapes reforms, creating a personified version of neoliberalism unforeseen by financial organisations.

The book also pinpoints the key issue of accountability. The expansion of unguarded bureaucracy at the frontier, the use of decrees to impose reforms, and the national being absorbed in the supranational all contribute to critically alter the “conditions of political accountability and participation [which] depart significantly from their official representation.” Chalfin establishes that customs headquarters’ measures are simultaneously “below the law, that is, temporary or mere procedures … and encouraged by international bodies that stand outside the law”. Therefore it appears that neoliberal reforms can blur the face of accountability

Chalfin’s analysis demonstrates that neoliberal policies are not thrown in the abstract but among people who are social individuals with multiple agencies. Many neoliberal economists seem to disregard this factor and rely on the “invisible hand of the market” dogma, whereas reforms are actually transformed, reworked, distorted on the ground. Chalfin’s effort to stress the importance of history in behaviours is spot-on, as Ghana’s exercise of neoliberalism embraces older and newer traditions. The general tone of the book might be too dense for the average reader but Chalfin’s fascinating insight into Ghanaian customs’ practices should please anyone interested in the deconstruction of global policies – a theme that is all the more relevant in these years of crisis.