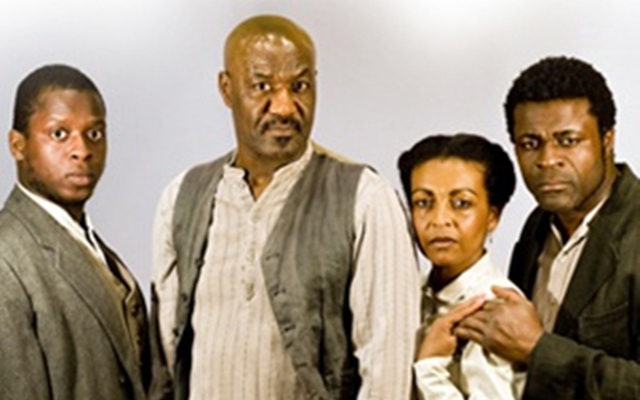 Joe Turner’s Come and Gone at the Young Vic

When strange and mysterious Herald Loomis arrives, young daughter in tow, searching for his wife the carefully set balance of the tenants passing through Seth and Bertha Holly’s Pittsburgh Boarding House is shaken.

Written in 1985n and performed on Broadway in 1988, and staged at our own Tricycle Theatre two decades ago; the second in the late August Wilson’s 10 play Pittsburgh Cycle chronicling the 20th century AfricanAmerican experience does not disappoint.

Contemporary writers Roy Williams, Kwame Kwei-Armah and Che Walker are part of a buzzing and packed Young Vic paying homage to a playwrighting giant.  Set in 1911 Wilson’s characters are from the first and second-generation of the waves of black people who migrated from the rural south to the industrial north post emancipation.

In the Pulitzer Prize winning writers towering literary achievement of character and storytelling, these are second class citizens carrying the culture and beliefs of Africa within them. It’s captured in an exuberant juba dance scene and the remnants of their Afrocentric spirituality and beliefs.

Don’t be wondering where Joe Turner is though; he’s the subject of the Blues song from which this quietly dramatic performance takes it’s title; the same Blues which punctuates this story of identity,  loss and loyalty.

At over two-hours, split between two scenes, these are not the jump-cut, snappy episodes of much of contemporary theatre but a type of social realism where a cast of characters relive daily affairs. This could be a weakness; but with David Lan’s elegant direction is actually enthralling.

Using the ground level stage perfectly the nine performers of this well honed ensemble dramatise dialogue full of humour, metaphor and allusion to the past and present, and an as yet uncertain future.

Led by the monumental Delroy Lindo as aging obeah man Bynum, with subtle but effective tics and mannerisms, this story of the American Dream (or nightmare as depicted by Malcolm X) takes the everyday and quite mundane lives of several transient characters.

Only Seth (Danny Sapani) and Bertha (Adjoa Andoh) are constant alongside the mysterious Bynum and has each of them articulate the sensibilities of a people who retain collective memory of enslavement and harsh oppression, but mix it up with present day worries and challenges.

Patrick Bernier’s set, in which the entire Main House’s auditorium, including the in-the round-set, is carpeted with Pittsburgh like red dirt, creates a perfect atmosphere.

A series of conversations and confrontations explore these endearing characters and the lives they lead.

Each one a symbol of the times and the endeavours of the African Americans to co-exist as equals in a land fertilised with their blood, but in which they are unwelcome, scorned and violently suppressed.

Kobna Holbrook-Smith, who maintains intense focus as well a thick coat, throughout typifies this psychological conflict. He’s returned after being kidnapped into a chain gang for seven years – a widespread practice in the era of lynching and American style apartheid and Jim Crow racism. This sub-plot is the scaffolding around which the story is built.

Daniel Cerqueira gets some great one-liners as slimy and unkempt, Rutherford Selig; Petra Letang’s Mollie Cunningham is sophisticated and elegant and Nathaniel Martello-White’s comedic Jeremy stands out. In a nice touch two young characters, Rueben and Zonia (Leah Ocran) untainted by the past and innocent about the present day hell their parents’ live, give hope for the future.

Woven into Wilson’s writing is the cultural, political, spiritual and social narrative of African America.  It’s a supreme effort and a crystal-clear and perceptive reflection of the ‘double-consciousness’ formed behind the veil of racism and discrimination, which is as much a part of American society as apple pie and loving your Mom.

At The Young Vic until July 3