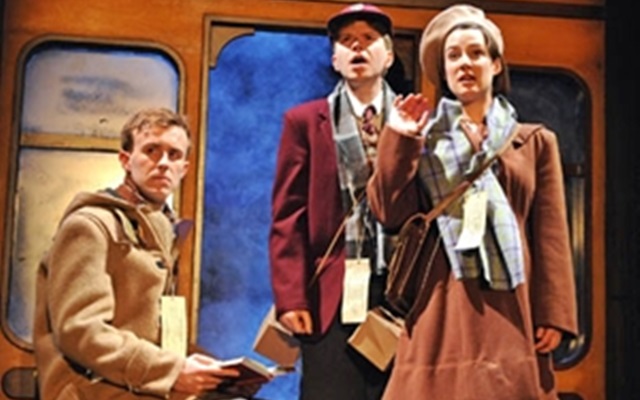 Review of Carrie’s War at the Apollo Theatre

Adapted from the award- winning tale by Nina Bawden, Carrie’s War arrived at the Apollo Theatre this summer, with a star studded cast including Prunella Scales and Eastender’s Kacey Ainsworth (Little Mo). Carrie’s War gives us an insight into what the lives of young evacuees in the Second World War would have been like.

Emma Reeves’ adaptation shows us how Carrie Willow’s life (played by Sarah Edwardson) changes dramatically when she is forced to leave her home with younger brother Nick.

The pair are whisked off to the small town of Druid’s Bottom in Wales, where they live with manipulative shop-owning local councillor, Mr Evans, and his kind hearted sister Aunty Lou. They befriend Albert Sandwich, a fellow evacuee, who lodges with the Evans’ estranged sister, Mrs Gotobed, played by Prunella Scales.

One of the play’s most interesting characters is Hepzibah Green. Played by Amanda Symonds this wise character brought a touch of magic to the play through her enchanting tales of ancient legends and curses. One of her gripping tales has a major part in the plot of the story. Of Caribbean descent, Hepzibah is a warm, welcoming and friendly charcter who lives with and looks after the seriously sick Mrs Gotobed.

A character named Mr Johnny, who has a disability, is played by James Beddard, who is one of the West-Ends few disabled actors. I thought he was a great choice for this part as you rarely see any actors or actresses with disabilities on West-End stages.

One of the most dramatic scenes the character Mr Johnny was involved in would be when he met Mr Evans’ son, Fredrick. Daniel Llewelyn Williams plays Fredrick who is back from the war and currently on holiday leave. He reveals his dark side in a dramatic confrontation.

The plot twists around an unresolved family feud, strange magic, tales of slavery curses and material greed for Mrs Gotobed’s estate.  The playwright manages to instil many comical and light-hearted elements into what could have been a very dark and depressing plot.  In particular, Nick’s outspoken character provides outbursts of humour.

Carrie’s war had a lot of moving and serious scenes. To lighten a lot of these scenes, small amounts of childish humour was dropped in here and there. One of the emotional scenes in the play was when the ill Mrs Gotobed passed away. The acting was very good as the characters looked genuinely sad. I think it must have been both the great acting and the melodic singing which caused tears to form in the eyes of many members of the audience.

The highlight of the set is the realistic two storey houses where many of the main scenes are featured. The houses move closer and further away from the audience so the eye is drawn to the house currently being used.

The costumes, typical 1940’s clothing are effective as they immediately set the scene along with various accessories such as small rectangular suitcases, authentic cardboard gas mask boxes and identification labels.

I felt that the play closely followed the book as there are few changes to the original storyline. Nina Bawden, (author of Carries War), was evacuated to Wales herself so it comes as no surprise that account of these evacuees is so realistic and vivid.

On the whole Andrew Loudon has directed this well, I’ve seen some of the plays he’s directed previously, such as Anne Of Green Gables, and felt that Carrie’s War reached the same high standard if not higher.

A great idea was the singing of welsh harmonies in-between scenes which kept the audience attentive and almost oblivious to the props that were currently being changed for the next scene. As the play was so interesting, it may encourage both adults and children to read the book and research on the topic of World War 2.

Overall all I felt the play was very entertaining as the set and mixture of different personalities and background stories absorbs you into the play very quickly. I enjoyed watching the play and would recommend it to all families with children of primary age and over as they may be able to relate to the book.

As Carrie’s War is a children’s book, the play would make a great night out for the whole family.