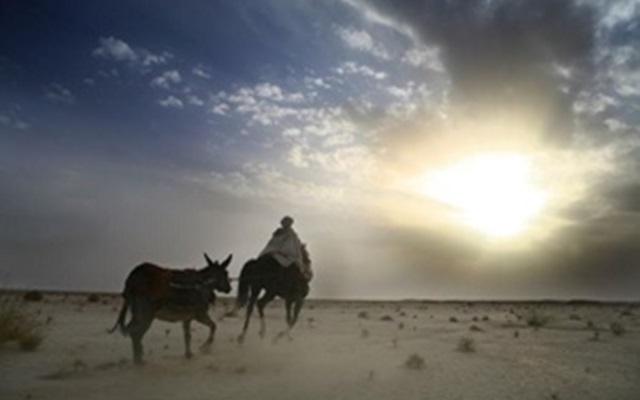 Film Review: Journey to Mecca: In the Footsteps of Ibn Battuta

“If I am to die, let it be on the road to Mecca.” These are the foolish words of a young Ibn Battuta, setting out on his first epic journey which is recounted in this short, yet lively 45 minute drama.

Journey to Mecca follows Ibn Battuta (Chems-Eddine Zinoune) on his 18 month journey to the city of Mecca, after leaving his home town of Tangier in 1325 aged just 21 years old. His aim was to complete the Hajj, the once in a lifetime pilgrimage all Muslims aspire to perform.

He chooses the most difficult route possible as seen in his dreams, and despite all advice from friends and family, sets out alone across North Africa with nothing but his horse and a few simple possessions.

But soon the adversity of desert sandstorms, robbery by bandits and an impassable Red Sea catch up with him as he learns the hard way how naive he had been. When he finally reaches Mecca safely he is altogether a more humbled man, and the film artfully contrasts reconstructed scenes of his pilgrimage with modern footage of the Hajj today, which three million Muslims undertake every year.

Ibn Battuta’s journey turned out to be the first of many in his travelling career which lasted almost 30 years, inspired by the Islamic maxim: “Seek knowledge, even if it takes you to China.” His voyage took him to over 40 countries including modern-day China, Burma, India, Somalia, Tanzania and Mali to name a few.

Having travelled further than Marco Polo in his quest for knowledge, he eventually documented them in one of the most famous travel journals of all time: Rihla, meaning Journey or Voyage in Arabic.

A warm and sincere performance of this historical character from Chems-Eddine Zinoune – who died in a car accident in 2008 before the film first premiered, is complemented by the captivating voice of Sir Ben Kingsley as narrator. Kingsley was ideal for this role, given his casting in past films that present Islam on the big screen like 1001 Inventions and the Library of Secrets and Islam: Empire of Faith.

There are some truly awe-inspiring scenes of desert sand dunes, crisp night skies and authentically bustling souks in Old Damascus and Cairo. The aerial scenes towards the end of the film of the Grand Mosque in Mecca were particularly stunning as footage of pilgrims walking full circle around the Kaaba is fast-forwarded to resemble a continuous human whirlpool.

The gigantic IMAX screen made the imagery all the more marvellous, filling your whole field of vision and making you really feel immersed in the picture. In fact you had to turn your head to catch a glimpse of the screen’s edge at the London BFI IMAX screen, which measures 20 metres high and 26 metres wide and is the biggest in Britain, as the cinema attendant keenly reminded the audience at the end of the film.

However, some close-up shots, such as of the bustling markets or moving caravan, had too much detail and would overwhelmed any viewer, no matter where they were sitting in the auditorium.

The script, easily a place where the film could go amiss, is thankfully quite balanced and mature. The narrator’s sentences explaining the parts and symbolism of the Hajj are kept simple and snappy.  It does not does preach religion in your face, but rather opens a window for the audience to see Islam in a fresh light and share in the wonder of this objectively spectacular annual event.

While initially premiering in January 2009 in Abu Dhabi, it’s a shame Journey to Mecca has taken this long to premier in Britain, and only once a week on a Sunday morning at that. Perhaps a sign of its success is the extension of the screening period – the last day of screening at the BFI IMAX in London which was initially July 25, has been extended to September 19.

It’s not every day you get a drama, historical character, bridge-building with religion and real documentary footage all in one, so this beautifully crafted 45 minute sequence is certainly unforgettable.

Journey to Mecca: In the Footsteps of Ibn Battuta is showing every Sunday at the London BFI IMAX until September 19  2010.