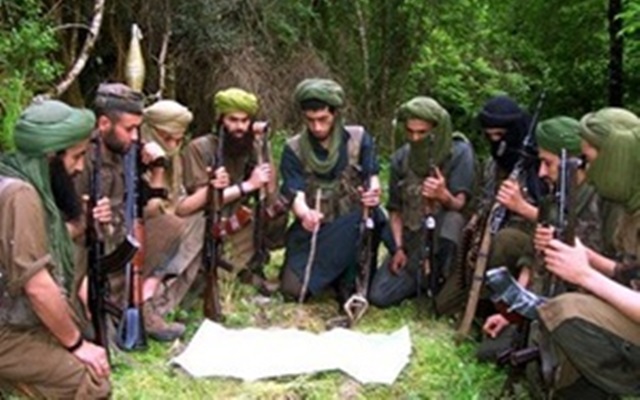 AQIM, al-Qaeda and the politics of terror in the Sahara

An ongoing debate has been centred on the possible implication of the local Touareg, and the actual link between AQIM and al-Qaeda, which has yet to be precisely established.

It was the ideal moment for Osama bin Laden to come back to life and officially condemn France via an audio tape, for its acts against Muslims throughout the world. Is bin Laden the mastermind behind all the operations in the Sahara? A closer look at the situation will reveal a far more complex scenario.

First, who could possibly say for a fact that Osama bin Laden is alive? His occasional audio or video statements will certainly not provide a solid enough argument to prove it. But regardless of his actual existence, the name “Osama bin Laden” and the al-Qaeda brand has definitely proven to be useful for Western governments and Arabic organisations.

In some respects, Osama bin Laden bears resemblance to Amari Saifi “El Para”. He was a leader of the former Salafist Group for Preaching and Combat (SGPC), an Islamic militia that has now become AQIM.

He was reported to have abducted 32 tourists in the Sahara in 2003, and he’s been officially sentenced to life prison since 2005. The similarity to bin Laden lies in his past, which is as ambiguous as bin Laden’s in terms of his engagement with official governments prior to becoming a “terrorist”. And like bin Laden, he appears and disappears when needed.

Bin Laden thus very conveniently came back under the spotlight of the media when France and the EU, as well as AQIM needed him most. For the former it’s given them a reason to adopt a strict attitude with regards to so-called terrorists while the latter can enlarge their credibility, thanks to support “from above”.

Does AQIM really have strong links to al-Qaeda? If we dig into AQIM’s genealogy, it emerges that the organisation’s roots are deeply embedded in Algerian history. It is the heir of the SGPC, and links to the Armed Islamic Group and the Islamic Salvation Front, both actors of the political unrest of the 90’s.

Al-Qaeda did not create the AQIM the same way it created the sister organisations that were, for instance, responsible for the terrorist wave in the UK and in Spain in 2005. Mohammad-Mahmoud Ould Mohamedou, former Foreign Affairs Minister of Mauritania, argued that AQIM actually tried hard to get closer to al-Qaeda for three years. Only in January 2007 was AQIM eventually dubbed al-Qaeda.

Two prominent and opposing figures of AQIM, Mokhtar ben Mokhtar and Abu Musab Abdel Wadoud also point directly to Algeria. Mokhtar ben Mokhtar, also known as “Mr Marlboro” for his cigarette trafficking business, saw his notoriety rise in the past for smuggling activities throughout the Sahara, while Abu Musab Abdel Wadoud was a member of the SGPC.

AQIM’s concerns seem more focused on the publicity side than the ideology. Political scientist Laurence Ammour, also consultant in international security, asserted that for these two bandits, the “AQIMisation” was a way to be spoken of in the media and get famous.

Political justifications then appear to be mere excuses so they can claim more money for ransoms. In other words, AQIM is no more than a group of gangsters who simply use the djihad as a way to do their business.

When the seven Areva employees were kidnapped, no reference was made to the event in the three most recent messages from al-Qaeda according to Mohammad-Mahmoud Ould Mohamedou, which somewhat illustrates a lack of interest on the part of al-Qaeda.

Moreover Laurence Ammour added: “I don’t believe AQIM could possibly engage in terrorist act on French soil as they don’t have the necessary resources.”

Do AQIM and al-Qaeda represent a strong threat for Europe then? Many specialists and politicians say so. The recent bombs coming from Yemen, which have been intercepted in the UK and Dubaï might confirm that theory.

The ongoing war in Afghanistan will definitely not sweeten the situation too. But the fact that SITE, the US intelligence group, has recently reported it has found al-Qaeda responsibility claims simply on Internet forums doesn’t give much credibility to that story.

The Touareg, nomadic people who have lived in the Sahara for centuries find themselves in the middle of this scenario. The geopolitical context is very complex and involves many international interests. Some Western and Malian officials have claimed they are involved with AQIM, which is possible on an individual basis but certainly not as a community.

The social situation there is very bleak. Poverty is ubiquitous in the Sahara. Many Touareg have no job prospects. “Subcontracting” a kidnapping for AQIM may appear for some as an easy way to make quick money.

This situation clearly endangers their community. Jean Francois Bayart, director of the French National Centre of Scientific Research, wrote that common potential dangers from the outside could contribute to the creation of a unified consciousness. But the Touareg haven’t shown a sign of unity yet, continuing their century old tradition of division.

Black, Jewish and second class
As marriage rates fall can true love be found in cyberspace?
Oil, terror and exclusion in the Sahara