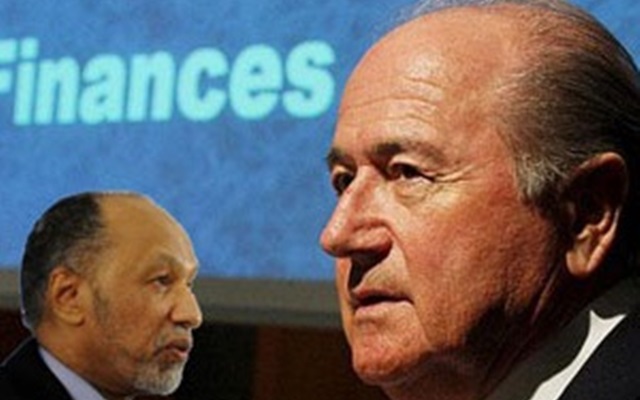 FIFA president Sepp Blatter kicked off his re-election campaign at the start of May, declaring zero-tolerance on the match fixing he claims “shakes the very foundations of sport.”

A month later the foundations of his organization have been thoroughly jolted: not by manipulated results on the pitch, but by the fixing of deals and backhanders within its own corridors.

Even by FIFA’s murky standards, the run up to Wednesday’s presidential election has surely marked a new low point.

Blatter’s sole opponent, Qatar’s Mohamed Bin Hammam, pulled out of the race over the weekend ahead of facing FIFA’s Ethics Committee.

Bin Hammam and vice president Jack Warner stand accused of handing over $40,000 (£24,307) in cash to members of the Caribbean Football Union, in exchange for votes. Both have been suspended pending a full investigation.

After being cleared of any wrongdoing himself by the same ethics committee – he was referred amid cries of conspiracy from his opponent – Blatter is left with a free run into a fourth term.

In a failed bid to bring the president down with him, Bin Hammam appeared to admit payments were made by claiming Blatter was aware of them and failed to report it.

The weekend drama followed a damaging couple of weeks for the Swiss-based organization.

There soon followed claims from an insider that Qatar’s bid team had paid FIFA executive committee members Issa Hayatou and Jacques Anouma $1.5m (£911,514) ahead of the vote to award the 2022 hosting rights.

Qatar has strenuously denied any foul play, blaming the scandal on an embittered ex-employee with an axe to grind.

There is now talk of re-running the controversial vote for the 2018 and 2022 world cups, with 82.1 per cent of supporters backing a re-count in a recent Guardian poll.

Meanwhile, the four members accused by Triesman have been cleared by FIFA, aided by an independent report commissioned by the English FA.

FIFA have promised to make the report publically available once they have finished scrutinizing it. It should make for interesting reading.

Triesman is no stranger to corruption allegations. He was forced to resign as head of England’s bid team after being caught on tape accusing rivals Spain and Russia of plotting to bribe referees.

During the former MP’s latest accusations, he expressed regret at not blowing the whistle on the allegations at the time for fear of derailing England’s bid.

His attitude mirrors that of the myopic England bid team’s during the corruption allegations revealed by the Sunday Times and Panorama ahead of the 2018 vote.

The investigations were described as “unpatriotic” and the sycophantic FA wrote to FIFA to express solidarity against the meddling media.

Blatter’s last words to the Executive Committee before the vote were reportedly “remember the evils of the media” and the result was a first round exit for England’s bid, amid cries of broken promises and conspiracy – so much for solidarity.

Sadly the FA’s approach is typical of their dealings with FIFA, an organization they are happy to cozy up to when it suits.

Along with the UK’s other three football associations, the FA enjoy a privileged place on FIFA’s International FA Board. It is seen as the guardian of the game and is responsible for any changes in rules and laws: a source of some resentment among other footballing nations.

Rather than make any concessions or commit to helping reform FIFA though, the FA is happy to let others throw mud from a safe distance. Their idea of protest is to announce they will abstain from voting in the upcoming election.

While this may seem like a noble stand, it will not make the slightest bit of difference as FIFA appears to answer only to itself. The FA need to start working from the inside rather than moaning from afar.

Triesman, for his part should have raised the alarm as soon as there was a whiff of corruption. To complain after the event risks the inevitable accusations of sour grapes.

FIFA themselves surely have to make their internal processes open and transparent  – by doing so they might silence some of the whispered jibes and accusations; but are they confident and clean enough to brave it?

Currently ten of the 24 FIFA executive committee members have either been accused or convicted of corruption.

Many of the cases involve one person’s word against another’s, with any evidence submitted remaining firmly within the walls of FIFA’s Zurich headquarters. Until a light is shone on proceedings then the doubts over fairness will remain.

Blatter is now resorting to his usual claims to clean up FIFA’s act and rebuild their reputation – if he is successful in Wednesday’s election.

Unfortunately for the world game, it seems the result of that particular match has already been well and truly fixed in his favour.

Latest racist comments from Keys should lock the door on his career
Fifa World Cup 2010: The disappearing art of the beautiful game
High hopes for Team GB at first Youth Olympic Games