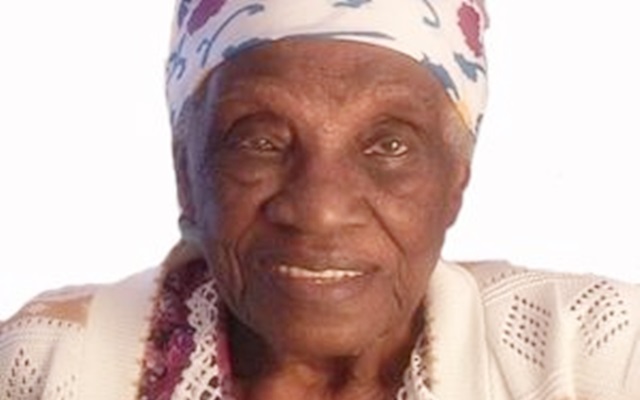 They are a vital link to our past. They teach us how to interact with older generations. They share their wisdom and their memories with us and love us unconditionally. Sometimes when parents are absent they become parents too. This International Women’s Day is in celebration of grandmothers everywhere and I am dedicating this article to my late maternal grandmother, Wilhelmina Harriott. 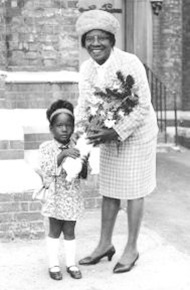 I first met my grandmother aged four in 1968 and one of my favourite pictures is the one on the left, which was taken on the steps of our family church by a professional phorographer.

My grandmother had flown over from Jamaica to spend a year in England to be with her children, as by this time her eight surviving sons and daughters had all emigrated and were living in the United Kingdom. I remember an elegant, well-spoken and very loving woman that everyone wanted to be around – and wherever she went there was laughter.

When we met again almost thirty years later nothing had changed. I arranged to visit Jamaica for the first time ever in 1998,  two years after my mother died, as my maternal grandfather was due to celebrate his 100th birthday. But God had other plans, my grandfather died two days before I arrived and just two weeks away from his 100th year.

I was expecting a very miserable and mournful atmosphere at my Aunt Jean’s house, where my late grandfather and grandmother lived, in Manchester, Jamaica. They had left their home in England some twenty years before to care for our grandparents – and care they did. Thanks to their love and kindness, my grandparents had very happy lives in their twilight years.

When I arrived my grandmother was happy and smiling and aside from the many cards and flowers and visitors paying their respects, it was business as usual. My grandmother had said to me warmly:

“You’ve missed him. He couldn’t wait for you any longer.”

The time we spent together for those two weeks were memorable, but easily surpassed by the time I spent with her when I returned to Jamaica in 2002, this time for a two-year stay. We had so many special times together.

We used to sit snuggled up together on the veranda watching people go by. My grandmother knew everyone and everyone’s business and it was amusing to learn what people were up to – like the continuing episodes of a soap opera.

My grandmother looked so much like my mother, whom she had out-lived, save for the wrinkles that more than a century had etched into her face. She had the same loving, kind nature and gentleness that always made me want to cuddle and kiss her, as I  did my mother when she was alive.

I remember one day when we were on the veranda and my grandmother had nodded off and her head was resting on my shoulder. The beautiful red and orange hues of the sunset painted the sky and I remember thinking to myself that I would cherish that moment forever. But at the same time, because I knew one day I would not be with my grandmother I felt sad and wept quietly so she couldn’t hear me.

On more than one occasion when my grandmother used to retire to her room for the evening we would sit with our feet up on her bed, chatting away until we both fell asleep.

She was a vital link to the past. She had an incredible memory and could recall the smallest details about events that took place decades ago.

For example, she recalled how when she was 10 year’s old she went live with her sister, Georgiana, who was living in Panama at the time. Ten years later as a young woman she went to work in Cuba for a wealthy family and looked after two young children who came to adore her.

There she met my grandfather, Hubert Harriott, who was a groom and looked after the family’s horses. “He really cleaned the saddles well,” my grandmother said fondly. They fell in love and got married in Cuba, and it was there that my late mother, Daphne, was born and one of my uncles, Vernal.

My grandmother was happily married for over 80 years and often spoke of the deep love she shared with my grandfather. “We never had a cross word…he was a lovely man,” she used to say.

But the words that most touched me were when she said one Christmas “You are worth something. We are very proud of you.”

Now that my grandmother has passed from this earthly dimension, her spirit and her love are always with me and I am always determined to live up to her high expectations of me, to honour her memory.

It is right that we celebrate grandmothers on International Women’s Day, as not only are they a link to the past – studies have shown that their presence when children are growing up, contribute to the health and survival of future generations.

A study by University College in London published in the Royal Society Journal in 2000 revealed that in Gambia, maternal grandmothers improve not only the nutritional status but also the survival of children.

A similar study carried out in Senegal published in the Social Science and Medicine journal in 2004, also found that grandmothers play an influential role in the household and on child health matters.

Their findings revealed that grandmothers helped with the supervision and care of children, mediated in situations of conflict and provided health and nutritional advice to pregnant women before and after delivery.  They were acknowledged by all generations as playing a vital role in the village, which is expressed in the popular saying:

I asked people to share their feelings about what their grandmothers mean to them. Here are some of the responses:

“My grandmother taught me to be persistent and to always do my best. Love and miss her.” Peter Harriott

“I only knew my maternal grandmother Katherine Ojo for three years when she died aged 73. I was a mixed up teenager, I needed someone to listen to me and assure me and she did that. She also helped me build my battered self-esteem.” Franca Harrison

“My Grandmother is probably the most important person in my life. It is in her presence that I feel the most unconditional love. She is currently 95 and still going strong. I pray she too will live to see her 100. Very special people are grandmothers.” Evadney Campbell

"My earliest memory of my maternal grandmother, was how homely and caring she was, she was always showing me things, like how to knit. She was a fantastic cake maker, she had Parkinson's before she died and was less like my dear nan to the outside world, but to me she was the same lovely nan. Bless you nan, love you for ever." Val Harriott

"My grandmother meant the world to me when she was alive.  The epitome of respect, longevity (she was 95 when she passed away) and a woman who was respected for being honest and upfront." Bernard Pettis

"Grandmothers represent strength, stability, reassurance, powerful links with history and the past. One of my grandmothers lived to 108 and one was descended from Welsh, Jewish and African ancestors (so my late father told me)." Ionie Benjamin

Watch a YouTube video of Wilhelmina Harriott enjoying Christmas with her family in 2003:

The British government must compensate Mau Mau Veterans for colonial atrocities
As marriage rates fall can true love be found in cyberspace?
Glossing over Africa’s image

One Comment On “International Women’s Day Feature: In celebration of our grandmothers”