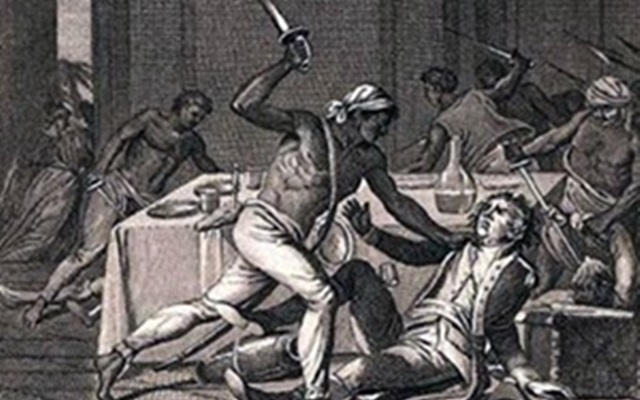 If We Must Die: Shipboard Insurrections…the Atlantic Slave Trade

This essential contribution to the history of the Atlantic Slave Trade and the Holocaust against the African people conducted by western European powers and the US, is also an alternative story of the Americas.

With impressive research a picture emerges of the often-overlooked role of revolts and rebellions on board the notorious slave ships that transported millions of African men, women and children across the Atlantic to involuntary servitude.

This is a story of heroism exemplified by more than 400 documented shipboard revolts over a four-century time span.  The author asserts that many more similar events remain to be investigated.

Whilst Eric Robert Taylor meticulously categorises his analysis he never ignores the humanity of the enslaved Africans and contextualises the horrendous and debilitating conditions in which they were confined – a generally brutal period of human history in any event, retaining the human spirit of dignity, defiance and courage to strike back against their oppressors.

A specialist in African-American history, Taylor traces with thorough collation of facts, he heroic resistance of the African people from the time of their kidnap in West Africa, to their transportation and imprisonment on the coast prior to the murderous Middle Passage. At each stage the enslaved people fought back, resisted and refused to accept the crimes being committed against them.

Refusing to skirt round the malicious, systematic torture and rape of women and children the author humanises the enslaved people and shows that though despondency, conciliation and capitulation was a natural consequence of their oppressive conditions, such emotions existed alongside supreme courage in the face of bestial treatment.

The author also addresses the little known history of the inter-American transportation and sale of enslaved people. According to Taylor, the famous Amistad legal case is not representative at all, as it downgrades the more critical resistance of the African and African American people in defending their humanity.

Presenting the details of his international research without sentimentality the frailties and weaknesses of the enslaved people is clear. In the face of fear, rivalry, indecision and self-interest, not to mention obsequiousness and other survival techniques; captured people were still able to plan, organise and carry out sometimes successful revolts.

A detailed bibliography and chronological account of shipboard revolts, with reproductions of rare paintings and pictures of shipboard rebellions, challenge the philanthropic sentimentality of the recent 200 Campaign on the abolition of the Slave Trade.

Instead an alternative account places these rebellions as part of the yet to be written People's History of the Americas. It's part of the story of native and indigenous people’s resistance of slave society rebellions – of the Kilombos, Palenques and Maroon Towns and Free and Liberated Zones, of the Underground Railroad of the enslaved and exploited people.

Book Review: The politics of black women’s hair by Althea Prince
A Piece of Cake: A Memoir by Cupcake Brown
A childhood love of fairy tales fuelled interest in creative writing