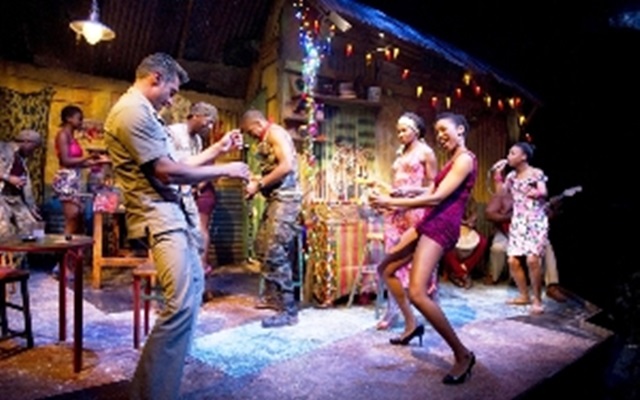 Review of Ruined, at the Almeida Theatre

The conflict in Eastern Republic Democratic of Congo has undoubtedly been one of the largest African tragedies for the past decade. Incessant gunfights, fleeing refugees, abused women form the sad daily routine of local populations.

This brutality, direct legacy of colonialism and current economic exploitation, constitutes the context of US playwright Lynn Nottage’s new play, Ruined. The play tells the story of Mama Nadi, who runs a bar and brothel in a small Congolese mining town. Inside, the war is not welcome and rebels, soldiers, miners are asked to leave their discords outside.

Instead, they drink and enjoy women while swaying to lively soukous beats. The more they spend the more Mama is happy, as her only concerns are about keeping business as usual. But when Christian, the salesman brings her two new recruits Sophie and Salima, both victims of atrocious sexual violence, Mama realises that remaining neutral is easier said than done.

Right from the start the audience gets transported amidst the sweaty jungle of Congo, thanks to Robert Jones’ excellent set. Nottage brilliantly depicts the insanity of the conflict, where local militias’ behaviour, as illustrated by Steve Toussaint’s Commander Osembenga, gives the terrifying impression that gratuitous acts of violence could occur at any time.

Jenny Jules as Mama is top-notch. Under the pretense of a strong, heartless woman, which likely kept her alive through horrible times, she reluctantly proves to be humane as well. A few overlong moments, most notably descriptions of atrocities, too poetic to be realistic, sometimes mar the performance. Silas Carson also seems utterly uncomfortable in Mr Harari’s shoes, struggling to find the right place among the other characters.

Life can be simple yet complicated. If that is true in Europe, stories such as Ruined make us, westerners, realise that people in some other parts of the world face far more alarming situations. Tackling those issues takes a highly demanding approach but Nottage manages to overcome the challenge with verve.

In spite of fear and death raging throughout the whole province, she shows that Congolese also strive to get on with their lives; or at least in appearance. For ignoring a war when you’re right in the middle represents a hard task. These women, who just like their country, are ruined, demonstrate through courage and resilience that hope is somewhere out there.

Showing at the Almeida Theatre until June 5 2010