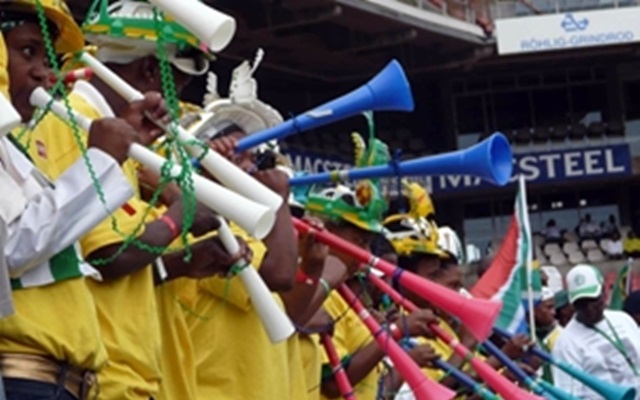 During the build up to the South African World Cup the press were in full panic mode. Will the stadiums be finished on time? How safe will supporters be? A week into the tournament those concerns have faded away, replaced by something much more controversial…something that has caused a buzz around the world…the vuvuzela.

The long plastic horn has become the sound of Africa’s first World Cup. The noise created by fans blasting them in support of their team has been likened to both a hornet’s nest and a jet engine taking off.

European supporters and broadcasters have led calls for a ban, arguing that the vuvuzela spoils armchair fans enjoyment by drowning out commentary and singing.

The BBC has received 545 vuvuzela complaints and is considering offering a sound-reduced service to disgruntled viewers.

Surely England’s insipid displays on the pitch so far are more reason to turn off?

The whole idea of hosting the World Cup in different parts of the globe is for people to experience a range of cultures, not for each tournament to be identical to the last. We see enough of that in England’s predictable Premier League.

It’s encouraging that FIFA and the South Africans are holding firm and refusing to consider a ban. Can you imagine the uproar if England hosted the World Cup in 2018 and fans were not allowed to chant?

Everyone seems to have an opinion on the vuvuzela and the debate is as much about culture as it is sport.

Legendary anti-apartheid campaigner Archbishop Desmond Tutu leapt to the instrument’s defence with a message to visiting fans: “You’ve come to South Africa and you are going enjoy everything that is South African. I say blow them even louder.”

The archbishop’s comments came at a celebration of South Africa’s Youth Day, held each year on the anniversary of the 1976 Soweto uprisings. European fans grumbling about the noise might reflect on a nation enjoying the freedom that was brutally denied them for so long under apartheid.

So far teams have adopted different tactics. French fullback Patrice Evra blamed his country’s poor performance on the vuvuzela, claiming they kept him awake at night and his side could not hear each other on the pitch.

Switzerland were more tolerant and encouraged fans to blow away at training sessions so players could get used to the wall of noise. It seemed to do the trick as they defeated tournament favourites Spain in their opening game, while the hapless French team look like going home early.

The Swiss team’s approach reflected that of their fellow countryman, FIFA president Sepp Blatter, who reacted to the storm on Twitter:

“I have always said that Africa has a different rhythm, a different sound. I don’t see banning the music traditions of fans in their own country. Would you want to see a ban on the fan traditions in your country?”

Blatter is not known for measured responses – he once suggested female footballers dress more skimpily to increase the popularity of their game. On this occasion however, he has done FIFA proud.

The origin of the vuvuzela is much disputed, with some saying it’s inspired by the horns Africans used to call villagers to gatherings. Others dismiss the idea of tradition and think it’s a cheap marketing ploy, only made popular by football in the last 10 years.

Either way it’s become an undeniable part of the match-day experience in South Africa, proving that traditions don’t have to be formed over hundreds of years to become important.

For South African supporters, it’s not a matter of how long the vuvuzela has been popular, just the fact that it is.

Whatever you think of vuvzela’s, you better get used to them. Sainsbury’s have sold over 40,000 of them and 1 million iphone users have downloaded the vuvuzela app. Make no mistake football fans, they are coming to a ground near you!