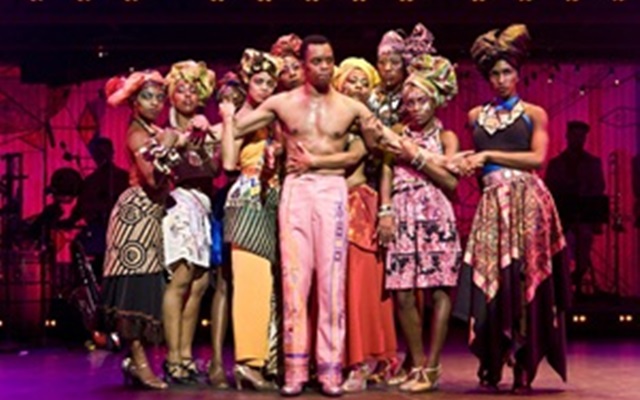 Review: Fela at the National Theatre

Already a Tony winning sensation in the US, the musical biography on stage of Afrobeat pioneer Fela Anikulapo Kuti is set to have the same impact on audiences at London’s National Theatre.

Delivering a potent cocktail of pan-Africanism, militant demands and multilayered and polyrhythmic beats wrapped up in a fusion of West African highlife music and the beats of soul and funk, Fela –  who died over 10 years ago is revered as much for his musical innovation as for his strident political standpoint.

As with many musical icons the back story is equally intriguing – family, friends and musical collaborators of Fela are just as important to the formation of the multi-instrumentalist legend.

Sandra Iszadore (previously known as Sandra Smith) is one of them. The Black Panther Party activist and companion of Fela during his 1960s US sojourn is acknowledged as one of two women (the other being his mother Funmilayo Ransom-Kuti) who most influenced the musical and political evolution which generated such powerful music.

The prototype strong black woman is credited with introducing the musician to the US Black Power Movement, to Malcolm X and other writers and leaders. The message certainly got through because from that period revolutionary lyrics ran right through the music and incendiary content fuelled courageous confrontations with the political authorities in Fela’s Nigerian homeland.

The portrayal of this influential and little heard of figure falls to British born, American based actress and singer Paulette Ivory who takes on the role of the Afrobeat pioneer’s radical companion.

The Hackney born performer may not be as well known in her birthplace as she is in the US but she has paid her dues on both sides of the Atlantic.  She brought Nala to life in The Lion King, took the lead role in the US tour of Elton John’s Aida, and has proved her versatile skills with singing gigs, and acting roles.

Now based in Los Angeles, she’s recently wrapped a 15 minute short movie called In Destiny’s Hands, self-written and co-produced with her husband.

Joining a mostly British based cast for the London run I spoke with Ms Ivory during a welcome lunch break as rehearsals intensify for the London production. She told me: “The show’s in great shape; we just want to get on the stage now and have an audience.”

With her experiences on the West End stage and from touring the US, the thirty-something performer recognises the different ways audiences react on either side of the Atlantic; and knows a good show when she sees one.

“A US audience is very vocal – if they are enjoying it they are going to let you know.  In London people keep quiet; I am really hoping they’re more vocal; it is not an inhibited show by any means – you have to be free and vocalise and get up and dance if you want to dance; it is going to be that kind of show!”

Upsurges of Fela’s popularity and interest in the man do explode but for a hard core his music and influence have never really left the stage, especially with his sons Seun and Femi continuing the legacy in their own right, and with their own unique styles.

Paulette Ivory is definitely in the new-to-the-story camp though, revealing that before being introduced to the New York show she didn’t know much about the charismatic musician. Since getting the part of Sandra [Iszadore] she’s become a fan of the music and the man, and has utmost respect for the character she plays.

“She was a very political, aggressive, strong woman. He became much more militant after meeting Sandra. He said if a woman can do that and fight for her people imagine what I can do for Nigeria.  So he went back [to Nigeria] with a new sense of energy and power.  I love that I am playing somebody so powerful and influential in his life.”

As Sandra in Fela she gets the chance to showcase her singing and acting talents; and in the future we may see less singing.  “I really wanted to get into the acting – I feel there is more that I haven’t explored; I enjoy them equally but there is so much more to come from me in acting”.