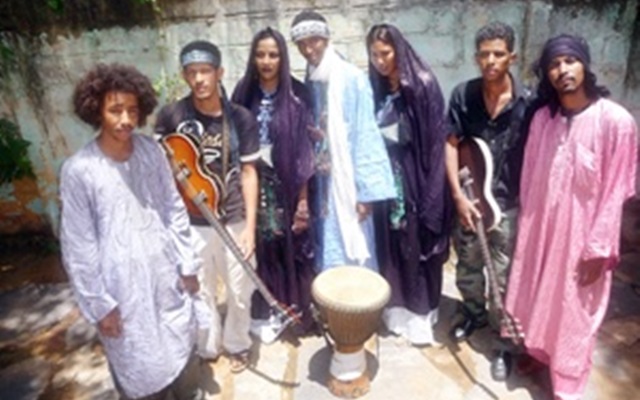 Representing the new generation of Touareg rock called ishumar, “music of the unemployed”, Tamikrest is the noble heir of legend Tinariwen. Far from the Malian Sahara, where the members are from, they’ve landed in the West for their first tour outside the African continent. They’ve recently released their first album, Adagh, and what comes out proves that they’re far from just another Touareg band.

The sun usually shines in Tinzaouatène, a small town at the heart of the Adagh des Ifoghas, a sandstone mountain located in northern Mali. What might simply look to many like an isolated area surrounded by the vast Sahara Desert, is actually the home of many Touareg, and in particular Ousmane Ag Mossa, leader of Tamikrest. He once dreamt of being a lawyer but he now dedicates his life to art, having realised that music could be an even stronger weapon.

A few guitar riffs on Outamachek are enough to set the tone of the album – we definitely are in Touareg territory. At first, the name of Tinariwen, precursor of the genre blending traditional melodies and sparkling rock, quickly comes to mind. The story of Tinariwen has marked Tamikrest members. For that matter, they readily admit the great influence of those whom they call their “big brothers”.

However Tamikrest goes somewhat further. Some other inspirations stand out to present a sometimes darker and more aggressive sound, as on Tamiditin or Tahoult.

“We’ve been listening to rock music and we wanted to introduce that in our songs,” says Cheikh Ag Tigly, the bassist of the group.

The percussionist Aghaly Ag Mohamadine adds: “We’ve all been fans of Dire Straits, Bob Marley, Jimi Hendrix, and if you listen to our music you’ll hear all these ideas.”

Tired of incessant rebellions in their Saharan region, Tamikrest, which means “union” in Tamashek language, also insists to express its rejection of violence.

“Our fight is through guitars,” says Aghaly. “If I just tell people stories in the street, they won’t care. But if I take my guitar, they will listen.”

Their music, like their words, gives a sentiment of sadness and nostalgia. The difficult living conditions of the Touareg in the Adagh des Ifoghas are without a doubt at the root of that feeling, as illustrated in the melancholic ballad Adagh.

“I’d frankly like to say how I hurt. We have to tell the world what we’ve been going through.” That’s the message of Tamikrest, according to Aghaly.

Adagh is ultimately a promising album of a young band that has to take off entirely. Beautiful compositions, like the hypnotic Aicha, show that Tamikrest has its place next to its elders. As they say:

“Tinariwen is the creator of ishumar music. Now it’s up to us to develop the concept and take it further. And there will be another generation after us. The music will always be there.”

Invictus: Film Review
Album Review: Colour of the Trap by Miles Kane
The vuvuleza is here to stay